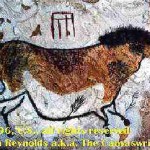 TRACCE no. 3 – by Susan Reynolds

I hated science. But I needed science, and the social sciences seemed less intimidating than the physical, so I chose cultural anthropology as “the easy way out.” I had raised my daughters and now I decided to follow one of my dreams, a university education. Now here I was, sitting in a darkened room, with 20 fellow students the age of my own daughters, with a strange little professor rambling on about rocks, dating techniques, the difference between skulls, Paleolithic somethings… 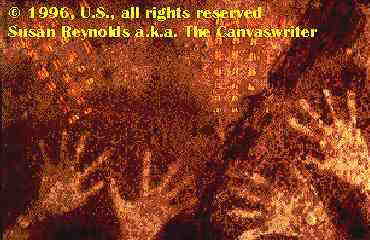 First lecture over, the slide projector’s light blinked on, the screen became an illuminated ghostly white, and the professor fumbled with the slides. Then it happened. The screen changed from white to colors of the earth, out of focus. He found the right knob, and slowly the Caves of Lascaux came into focus…

To say that my reaction to these paintings was emotional would be an understatement.

No paintings I had ever seen had caused such a reaction in my being.

Totally enraptured, I virtually ran to the campus library and began checking out books. I read, read, and read, until that library was no longer able to supply the images I needed. I began to paint. I wanted to feel what the “first” artists felt. I wanted to experience the colors of those images. I knew I could never truly know what they intended to say, but I also knew that by repainting them, I could experience the tiniest of “connections” and find my own interpretation… not very scientific, but then I’m not a scientist, I’m just an artist who loves history.

What I discovered was that the most simple of images could produce the strongest of emotions: the wonder of imagining back thousands and thousands of years. What their daily lives were like. What terrors they faced in the dark. What wonders they discovered. I was even more amazed that these people, the “first” artists, had the “inner drive” to create so deeply, that they had produced their own tools from nothing… Nothing has been painted or sculpted or carved since that has been any better. 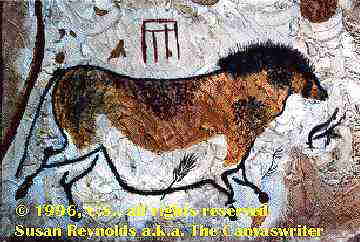 I started to experience even more feelings about those first artists. I visited “sites” as many times as I could. I used roll after roll of film recording for myself some of the “pictures” I felt I could use as references for my own paintings. My greatest task was to create images that were universal enough to be understood by all, reflecting the “human experience” of my life.

My reasons for painting these “petroglyphs” and “cave paintings” are simple. I want to share my belief that we are one family, not separate races, not separate families, but one family of human beings living on the planet Earth.

I want to remind myself that the history of man is a long tale.

I want to share with others the immense joy I find in ancient artists’ works, and to bring them into the light again. To say once more for them “we were here”… “remember us”…