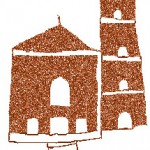 Some new and unpublished rock engravings were recently found at Monte Cotrozzi, near S. Maria del Giudice (Lucca , Tuscany, Italy), which is one of the minor hills of the Monti Pisani, separating the towns of Pisa and Lucca.

This place is locally known for the presence of a small etruscan settlement and a destroyed medieval castle on the top of the hill. The rock engravings discovered in the late sixties consist of a small group of engravings placed in a flat zone at the base of the hill used in the past for white limestone carving. They consist of cup marks, engraved small crosses and a large rock with more than forty holes connected with small engraved lines. Recently a further and accurate survey performed by Gruppo Archeologico Pisano (heritage volunteers association) discovered new and unknown engravings which can be dated from the early to the late medieval age. Among them, it must be specially cited a couple of stylized human figures with a cross-shaped body and with curved legs. At the end of each leg, in the place of feet there are deeper rectangular marks.

These two figures are associated with a small rectangular cup mark. On the base of their shape they seems to be related to an early or full medieval age.

The second important engraved rock shows the front-end of a church with a bell tower at the right side. The figure was realized using both pecking and linear engraving techniques and shows a richness of details, as the main door of the church, the lateral doors and one central large window realized by means of a lack of pecking. The bell tower is divided into some sections, each having a separating base floor and a door. The surface of the sectors was made rough by means of the same technique, except for the last highest sector where the two bells are drawn. On the top of the bell tower there is a cross with small circular points at the end of the three arms. Finally a couple of oblique staircases are drawn just below the main entrance of the church.

Apparently, the structure of the church does not seem to reproduce an existing one in the neighborhood, just because all the old Romanic churches (S.Maria del Giudice, Pieve Vecchia; Massa Pisana ecc.) have the bell tower at the left side.

It is quite difficult to determine the chronology of this engraving, but taking into account the details and a good conservation state on a not protected limestone rock which is subjected to erosion, it seems probable that it was engraved during the late or post medieval period and it can be in any way related to the local carving activities.

The proof that the engraving activity continued also during recent times in the discovery of an engraved figure showing a drum pistol.