Valcamonica-Valtellina: the state of research 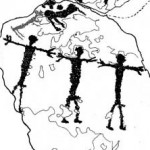 The rupestrian tradition of Valcamonica-Valtellina consists of more then two hundred thousands engraved figures and a dozen paintings. At present, the rock art is distributed across four fundamental periods from the Neolithic to the arrival of the Romans …

The rupestrian tradition of Valcamonica-Valtellina consists of more then two hundred thousands engraved figures and a dozen paintings (Arcà., Fossati, Marchi & Tognoni, 1995; Fossati 2001). At present, the rock art is distributed across four fundamental periods from the Neolithic to the arrival of the Romans in the valleys (Fig. 1; Anati 1976; De Marinis 1988; Fossati 1991). In the first phase, the period dating between the end of Neolithic and Copper Age (4th Millennium BC, 1st/2nd – beginning of the 3rdA styles of the Camunnian rock art, Fig. 1), topographic figures are found, the first representations of the territory whose execution on cliffs is perhaps tied to a real division of agricultural lands sanctioned by the ritual practice of rock art (Arcà, Fossati 2004). Other figures attributed to this phase are spirals and necklaces. On the rock 4 of In Valle (Paspardo, Valcamonica) a spiral is overlapped by a human figure in the so-called “praying” position . The chronology of these “praying figures” (in Italian oranti) has been very much debated in the last recent years. Emmanuel Anati and his school (Sansoni, Gavaldo 2009) dates these very schematic human figures to the Neolithic period, because they would reflect a Neolithic conception of the society. The school of Raffaele De Marinis, on the opposite, underlines that the overlappings, show that the praying anthropomorphs always cover spirals, topographic figures and ploughing scenes; in particular the praying figures cover Bell Beaker or Early Bronze Age daggers, so this would indicate that the chronology for these figure is the full Bronze Age period (De Marinis 1995; Ferrario 1992; Arcà 2001). It is more or less accepted that this first phase is preceded by a more ancient period, perhaps going back to the end of the Paleolithic (Anati 1974). The figures of this ancient period therefore are very few and all represent animals, especially elks and deer. This phase, called Proto Camunnian (Fig. 1) for its great antiquity and content, is in some way tied to the style and chronology of the Ice Age Art, today also attested outside caves, from the recent findings of Ice Age art on walls and flat rocks in the open air in Spain and Portugal (Aa.Vv. 1997; Abreu, Arcà & Fossati 1995; Martini, Baglioni, Poggiani Keller 2009). 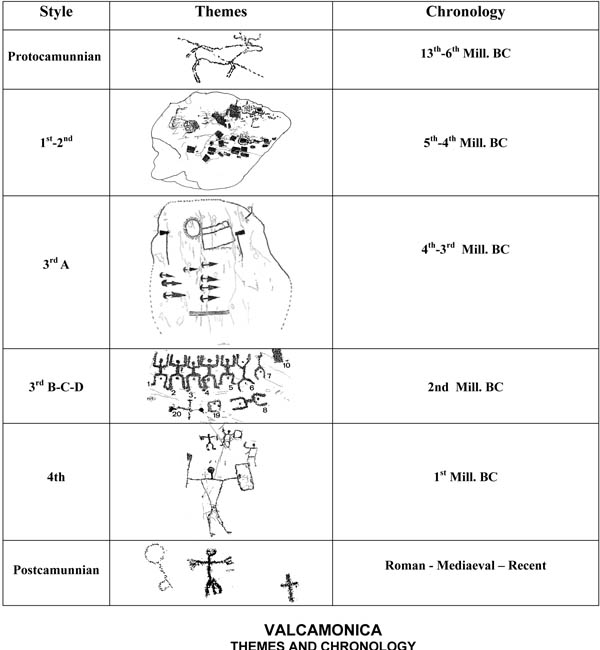 The second phase, that corresponds to the full Copper Age (4th-3rd Millennium BC, the so-called 3rd A Camunnian style, Fig. 1), is characterized by the phenomenon of the stele and menhir, boulders that represent the first anthropomorphic divinities of alpine people (De Marinis 1994; Casini & Fossati 1994; Fedele 2006). In this style 3rd A we can distinguish three different periods of carving: a first phase called 3rd A1 – characterized by symbolic figures – and a second phase called 3rd A2 – marked by anthropomorphic figures. A last phase, called 3rd A3, is very short and it has to be attributed, with every probability, to the Early Bronze Age (end of 3rd Millennium BC) (De Marinis 1994). The most important depiction is the Sun, sometimes represented as a man crowned by a solar circle with beams, and often associated with weapons; two other personages are represented: one feminine, adorned with numerous jewels (eye pendants, necklaces, combs), and another male divinity, symbolized by a cloak provided with fringes. The iconographic repertoire of the boulders is very rich, including animals like deer, dogs, foxes, wolfs, chamois, ibexes, boars, bovines and weapons such as axes, halberds and daggers. Many new discoveries have been done both in Valcamonica (Ossimo, Cemmo and Paspardo) and Valtellina, especially in the area of Teglio (Casini, Fossati, Simonelli). As demonstrated by the work of Francesco Fedele at the site of Anvòia (Fedele 2006), near to Ossimo (Valcamonica) and more recently by the discoveries at Pat, Ossimo (Poggiani Keller 2009), stele and boulders created alignments near to flat cairns, with the engraved side of the stele facing East (Fedele 2006). These sites had certainly ritual and maybe religious functions for small communities or families, representing also a nodal point for boundaries and intertribal relations (Casini, Fossati 1994). 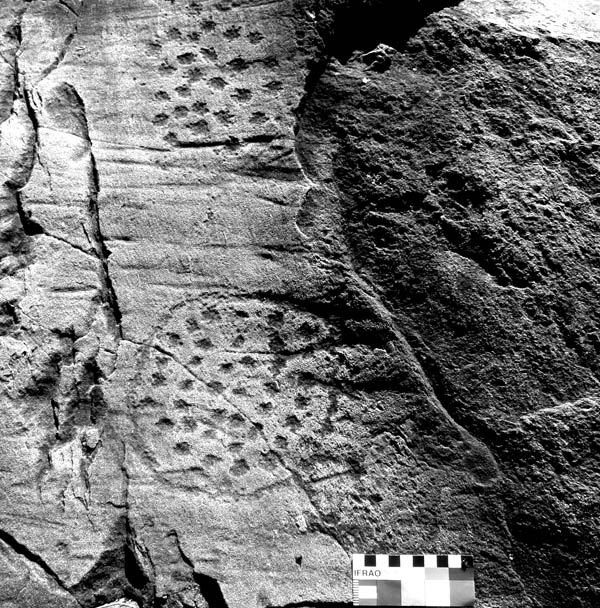 Fig. 2: Topographic representation on the rock 83 of Vite-Bial do le scale, Paspardo. Photograph by A. Fossati-Le Orme dell'Uomo

The third phase of the rock art of Valtellina and Valcamonica (the 3rd B-C-D Camunnian styles, Fig. 1) is generally dated to the 2nd Millennium BC and corresponds to the Bronze Age (De Marinis 1995). The iconographic repertoire is constituted by numerous weapons (but no longer associated with divinities), ploughing scenes, ritual with anthropomorphs, and symbols (solar signs and shovels). During the Final Bronze Age the styles become geometric and static. Among the figures there are many big-hands, others are real warriors holding spears, swords, shields and furnished with crested helmets (Fossati 1992). The artists want to emphasise a role, that of the warrior, that is becoming more and more important in this alpine societies. The Final Bronze Age anticipates the most common themes of the Iron Age rock art: praying figures, warriors, duellists, hunting scenes. In this scenes the warriors are depicted as if taking part in a victory parade, often showing off their nudity in heroic fashion, as was also the case in Greece or in Etruria. The engravings of the Iron Age represents the majority of the rock art tradition (fig.1), probably the 80% of the total. The more recent study have testified that this area was inhabited by the Camunni and the Vennonetes, whose name appears inscribed in the Tropaeum Alpium near Montecarlo, along with the names of the alpine populations conquered by the Romans during the war campaign of the 16-15 BC (De Marinis 1988; Fossati 1991). This populations had been often associated with the Euganea gens, especially by the Roman historians (Cato cited by Plinius III, 133-135). More recent researches testify the cultural peculiarity of a region that extends from Valtellina to the Giudicarie where, at least from the 5th cent. BC, are known potteries with similar features (the jugs of the so-called Breno, Dos dell’Arca and Lovere type), the development of an autonomous writing tradition that utilizes the north-etruscan alphabet (the camunian alphabet) and, last but not least, the strong appearance of the figurative “language” that we are now used to call “rock art”. This wide area, even if with strong connections with the “Retic” world of the Adige Valley, should be united by cultural links that we could today explain with the presence of a common ethnos, that of the Euganei (De Marinis 2001). 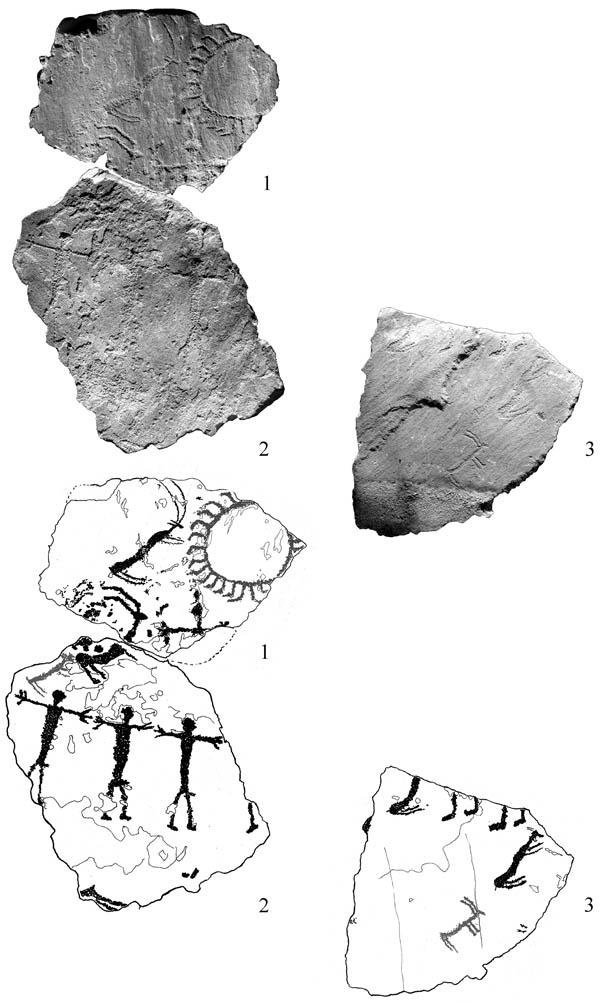 Fig. 3: The three fragments of stele found at La Bolp, Paspardo (drawing and photographs by A. Fossati and S. Casini)

The figures that belongs to the Iron Age offer the opportunity of a better comprehension of the chronological phases. The period, called 4th Style, has been divided into 5 different sub-phases (De Marinis 1988; Fossati 1991). The figurative rock art tradition finished in Valtellina at the end of the 6th cent. BC, at the beginning of the 4th 3 style, while continued in Valcamonica until the 1st cent. AD, after the arrival of Romans in the valley (Arcà., Fossati, Marchi & Tognoni, 1995). The chronology of the Iron Age rock art is linked not only to the study of the superimpositions, which assures relative chronology, but also to the depiction of weapons, which may suggest an absolute chronology (Fossati 1991). These weapons are very well characterised, like shields, constantly circular in the first Iron Age, and quadrangular-oval during the Second Iron Age, due to the influences exercised firstly by the Etruscans and then by the Celts (Stary 1981). Particular weapons appear in the Late Iron Age, such as the halberd-axe, a half moon blade shaped axe, a typical weapon of the Central-Eastern Alps population, or the Introbio knives, with the characteristic anchor-shaped point saver: both these weapons are found in contemporary tombs or settlements (Fossati 1991). Also style is a chronological indicator. Till the 4th century BC styles were influenced by the Etruscan art: from the linear geometric style (8th cent.) to the full naturalistic phase (5th cent.). The apogee of the naturalism is reached at the end of the 6th century and during the 5th cent. BC, when it is possible to recognise artistic schools and even single artist’s hands. In this period also paintings are known as it is witnessed by the discoveries of a dozen of paintings in the Valley (Fossati 2001). Second Iron Age styles are the direct consequence of the separation from the Etruscan world caused by Celtic invasions in the Po Plain. Styles become decadent and themes poor. It is not possible to speak of a Celtic style in the Camunnian art, even if the Celts transmitted to the nearby population their preference for a symbolic art (Fossati 1991). Some themes have a chronological value: horse riding is possible only starting from the 8th cent. BC; North-Etruscan inscriptions are possible only after the 6th cent. BC. Some Latin alphabetaries must be dated to the end of the 1st Cent. BC or later, due to the Roman arrival in the valley in 16 BC. 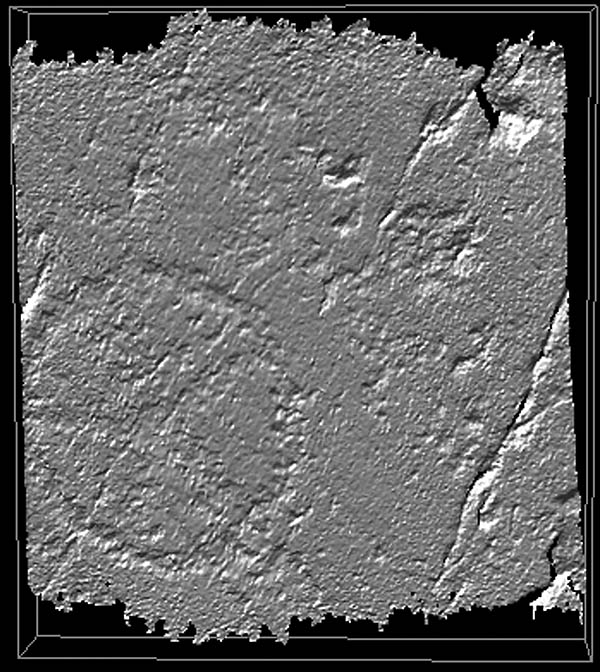 The rupestrian tradition continued in Valcamonica until the arrival of the Romans, who reached the area in 16 BC. A legion (about 6,000 soldiers), under the direction of the consul Publio Silio Nerva, subjected the Triumplini, Camunni and Vennonetes (the inhabitants of Valtrompia, Valcamonica, and Valtellina respectively) in a single fast military campaign. This is attested by the registration of these three names in the Tropaeum Alpium, the monument constructed by Emperor Augustus in 6-7 AD at La Turbie, France. The interruption of the rupestrian tradition in Valcamonica is perhaps due to a combination of three factors: the process of assumption of Roman culture during the second part of the first century AD (the Flavian Age); the diminution of authority of the social classes that held power until that time; and the increasing economic, cultural and religious attraction caused by the Roman settlements, particularly the new colony of Civitas Camunnorum, today Cividate Camuno (Rossi 2007). These factors reduced and finally destroyed the power of the social aristocracy whose traditional themes had constituted, until then, the iconographic patrimony of the rock engravings (Fossati 1991). 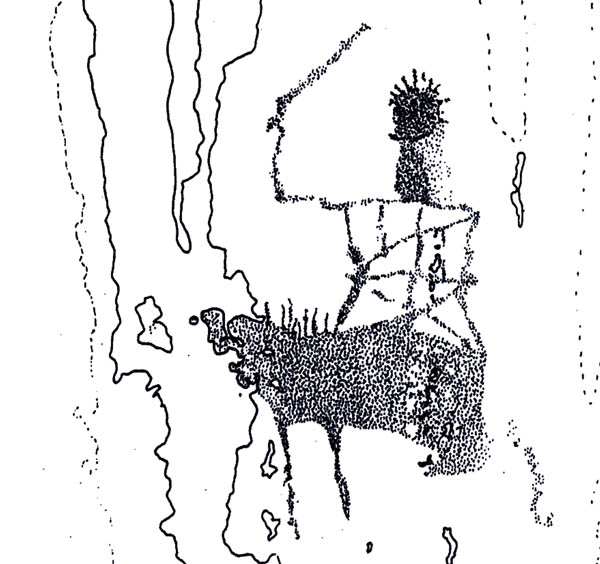 With the arrival of Christianity, artists came back to the rocky areas and engraved new themes taken from Christian symbols: crosses, keys, shears, Solomon’s knots (a cabalistic design of a knot without end to the cords), warriors, castles and, dates and inscriptions. This phase, called Post Camunnian by Anati (1976) in the last years has received new attention by the scholars (Sansoni 2001). In any case this art has nothing to do functionally and stylistically with the prehistoric art of the previously described periods.

The study and the research of the rock art of Valcamonica is becoming more and more important, as brings new information and more discussions between different schools and scholars. We also hope that a new generation of researchers can approach the field of the studies and add new ideas and new publications on this interesting subject that is the rock art tradition of Valcamonica. 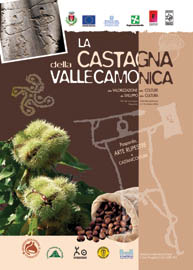