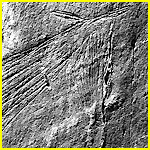 INTERNATIONAL UNION OF PREHISTORIC AND PROTOHISTORIC SCIENCES
Member of the International Council for Philosophy and Humanistic Studies
(C.I.P.S.H. – U.N.E.S.C.O.)

PROCEEDINGS OF THE XIII CONGRESS

Section 8     Art in the Palaeolithic and Mesolithic

Section 9     The Neolithic in the Near East and Europe

The Côa Valley area was under the scientific superintendence of Nelson Rebanda, a state Archaeologist, encharged with the Côa Area at the Northern Region Department (Direcção Regional Norte) of IPAAR (Instituto Portugués do Patrimonio Arquitectónico e Arqueológico).

When the Portuguese government decided in 1992 to undertake the construction of a huge new dam on the Côa River, a protocol of collaboration was made between the IPPAR and EDP (Electricidade de Portugal) and Rebanda was put on charge of the “Plano Arquelógico do Côa” (archaeological plan of the Côa).

Curiously, no official notice was made of the discoveries by Rebanda’s team. It was only in November 1994 that the Portuguese archaeological community became aware of the findings. An International movement to save the engraved rocks started and a strong campaign to stop the construction of the dam was launched. Television, radio and newspapers transformed the issue in a political case.

Menaced by more than 100 meters of water (and mud) of the future dam many new sites were quickly ‘discovered’ by the local inhabitants along more than 17 km of the Côa river and adjacent Douro river: Ribeira dos Piscos, Vale de Figueira. Peñascosa. Barca. Vale Jose Esteves, Vale Vermelhosa. Vale de Cabrões, revealing with all evidence the existence of a big open air palaeolithic rock art area, one of the most important in Europe.

The more relevant discovery was perhaps the Vale da Casa site, a few km down from the Côa confluence along the Douro river. It was studied (1982) by A. M. Baptista (now with M. V. Gomes he is encharged with the documentation in many sites of Côa Valley area), just before being submerged by the Pocinho Dam. which at the same time submerged many engraved panels in the Côa Valley area. No protest against the dam was made. 23 engraved panels were found (and partially traced or moulded), and more than 100 Bronze Age graves. In the engraved rocks were present (but not recognized as Palaeolithic, simply reported as similar to the Mazouco ones) many scratched animal figures, actually identical to the Côa and Vermelhosa ones.

For the first time archaeological researchers, environmental associations and student organizations (note the peculiar slogan ‘As gravuras não sabem nadar – The engravings are not able to swim”), worked together to make possible the creation of an Archaeological Park. The International cooperation was of capital importance, linking scientific advice to media support.

After a long and passionate “fight”, and after the election of a new government in Portugal, finally in November 1995 the building of the dam was officially “suspended” (but not forsaken), to evaluate the scientific importance of the site and to create a commission for the installation of an Archaeological Park.

Thus being in an organizing phase, and under the spontaneous arrival of a large number of national and international tourists, the Park was inaugurated on August 10, 1996, under the direction of the archaeologist J. Zilhão. At the moment guides has been instructed, booklets, records and cards printed, multimedia applications compiled, and two reception centers has been prepared at Vila Nova de Foz Côa and Castelo Melhor. A third center is planned in Moxagata. From these centers tourists can start a guided tour (by the Park Jeeps, only guided visits are allowed) to Canada do Inferno. Ribeira dos Piscos and Peñascosa, the most important

engraved sites. The surveillance is assured by a private agency, previously working for the dam and now for the Park.

It is also important to notice that for the first time a Rock Art area encourages the institution of an economic development plan (called “Pro-Côa”), now funded by the Portuguese Government and the European Union.

With the aim of giving a definitive”status” to the Park (and at the same time to the abandonment of the dam), it will be useful to find the way of enlarging the daily number of tourists (also to extend the local economic involvement), and to preserve the natural environment (by the building of some wood-walks), which can easily turn into a dusty barren land.

An International involvement seems also desirable, to find the way of the best multioriented scientific study, and to locate a wild-like area, to leave engraved rocks free from any human intervention (many surfaces are actually traced after a complete washing and cleaning), to make possible future analysis of patina (dating) and of engraving techniques.

3 – THE VERMELHOSA SITE AND THE “ETCHED IN TIME” PROJECT

The Vermelhosa site is situated in a small lateral little valley on the orographic left side of the Douro river, less than 1 km down from the Côa confluence in the Douro.

In this area (and also in most Côa Valley areas) it is easy to find many vertical red surfaces of Xisto Grauvaquico Ante-Ordoviciano, a sedimentary metamorphosed rock where silica, quartz and aluminum components make water erosion quite impossible. So the rocks are very well preserved, not eroded, only (sometimes hardly) affected by the natural detaching of (sometimes large) blocks along the schist fractures. 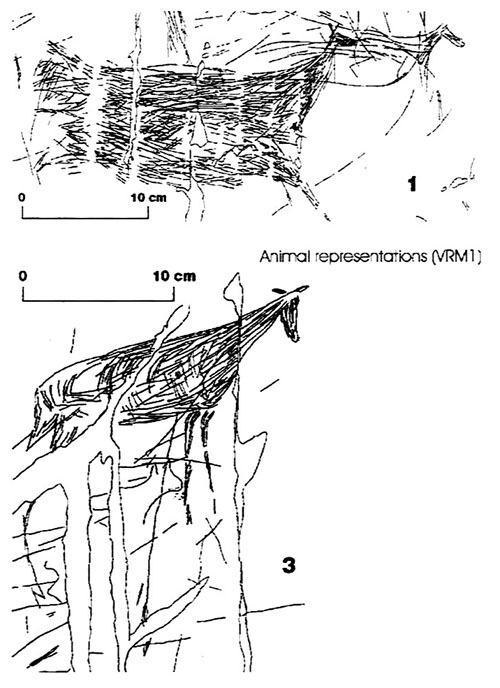 As in all open air rock art concentrations, the rock itself plays a fundamental role, making possible the execution of the engraved figures. In this sense it is very probable that many other engraved sites are present in the adjacent areas (where the schist is largely diffused), mainly along the Douro river sides, perhaps sorrowfully submerged by the Pocinho dam water.

Looking at the large extension of the open air engraved areas it seems that the common idea of a cave limited hidden Palaeolithic Art is to be differently considered. In the same way the diffused presence of engraved panels close to the river sides, clearly related to the sites of animal watering, probably obliges to shift in this case the definition of a prehistoric “sanctuary”‘ into something more related to the hunting practice and to the seasonal relationship with a vast territory.

The work at the Vermelhosa site, still in progress, is conducted by an International (P – I – USA – PL) team (coordinated by M. S. Abreu. A. Arcà, A. Fossati, L. Jaffe) in the joint project of AARP-Footsteps of Man “Gravado no Tempo – Etched in Time”, funded by “Ministerio da Cultura – IPAAR – Plano Nacional de Trabalho Arqueologico”. 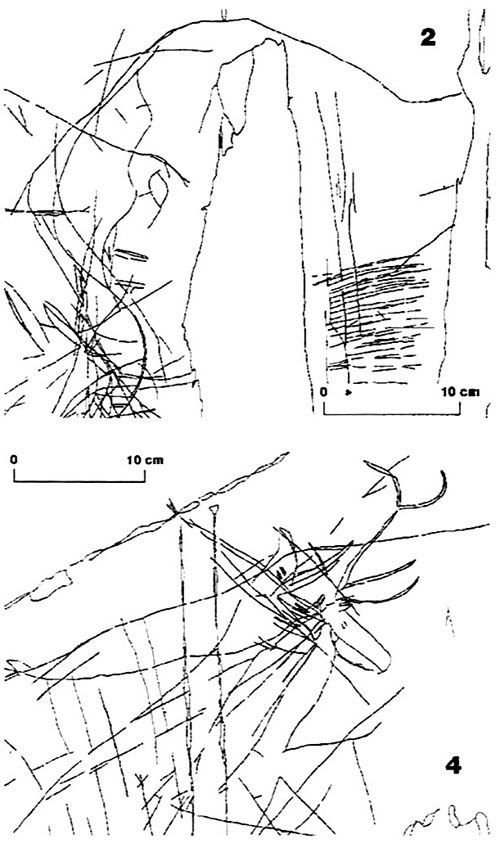 In the geological field J. A. Bravo Nunez and S. A. Marques are working, B. Campos and M. Coelho in organization and tracing. P. Firnharber in photographic documentation, J. Kolber in sketching and conservation consultation.

2. Iron Age figures (horses and a riding warrior raising a spear -fig. 11-), still white and without patina, cover Palaeolithic ones. 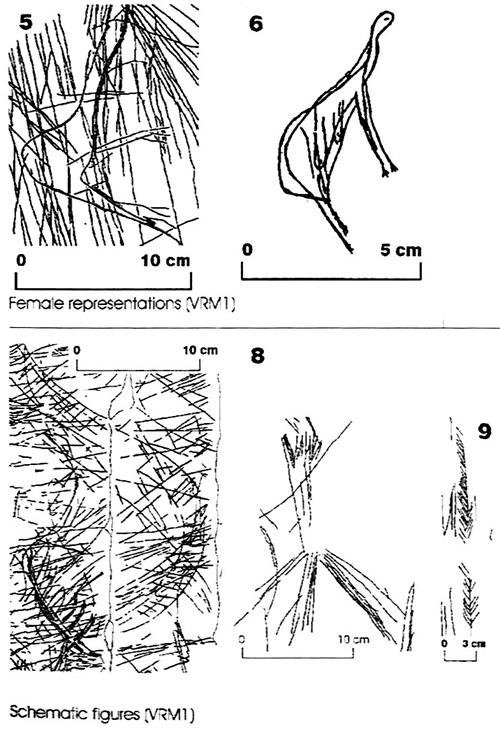 Even if stylistic-based chronology has been recently doubted (though by not yet well tested methods), such a large array of comparisons renders statistically unlikely any not Palaeolithic-culture related interpretation. All Côa Valley pecked figures add favorable elements. No not Palaeolithic Rock Art complex, even in the Spanish Levant style, show a similar range of figures, themes and scenes.

The clear evidence of Iron Age figures, whose scratched lines are much whiter than the overlapped Palaeolithic ones, added to the presence in the surrounding area of Bronze Age, Middle Age and contemporary engraved signs, show a complete longtime range, still continuing, where Palaeolithic figures are taking an incontestable place of authenticity and of main European archaeological and cultural interest.

Returning to the Vermelhosa particular evidence, we should add for the descriptive side a probable lion or feline figure -fig. 3-, the representation of a horse-like or gazelle-like figure (also whiskers are scratched) hit by a javelin -fig. 3-, and the particular dorsal lines of two deers, which humps, joined to the large neck, render the figure more similar to a Megaceros than to a Cervus Elaphus -fig. 4-, A particularly big figure shows, though in doubt because of the undemonstrated existence of this animal in Portugal during the Upper Palaeolithic, a Mammoth-like head shape -fig. 2-.

One female figure without a head is depicted in sector A -fig. 5-, apparently inside (or overlapping) a roof-like or hut-like figure. Two other female figures have been detected in sector B: one of them shows head, arms and breast -fig. 6-.

Most of the animals are scratched in a fine way. with a little head and body, head and legs filled by parallel curved lines, depicting coat or muscle shape -fig. 1-. They are oriented to the right size, being probably involved in a large scene.

Regarding the Iron Age. rock no. 4 shows an interesting duel scene, with two warriors handling double pointed spears, with typical head-dress or helmet and ithyphallic attitude -fig. 10-, This scene should be compared with a similar one depicted in a Liria vase. 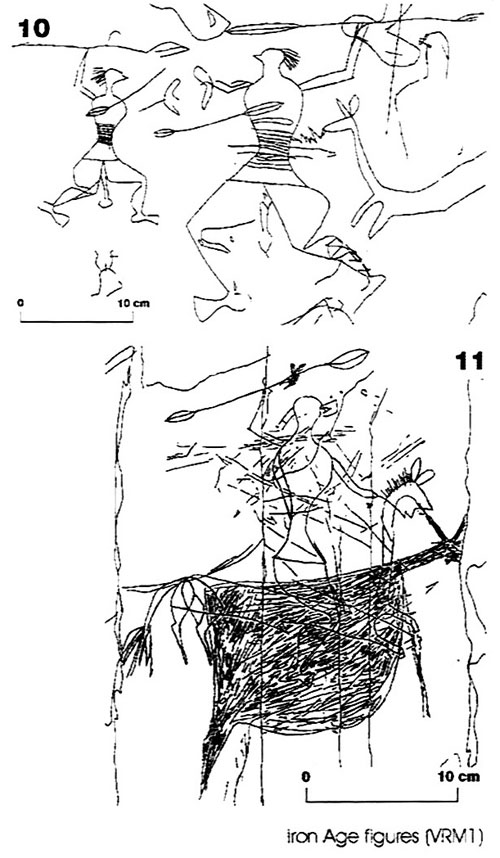 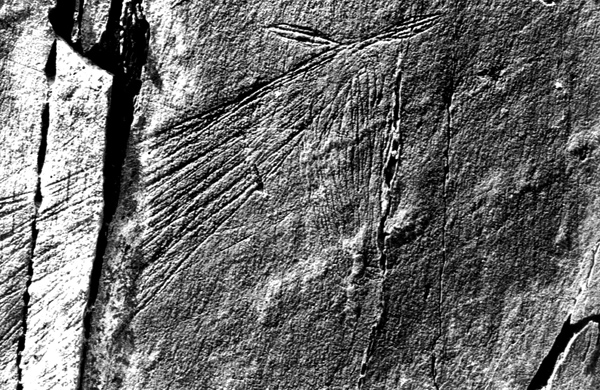