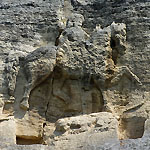 The Madara rider (in Bulgarian Мадарски конник, Madarski konnik) is a unique monument of the ancient Bulgarian art. It is carved, almost life-size, at 23 meters above the ground on the vertical 100m high cliff of the Madara National Historical and Archaeological Reserve. It is situated in the north-eastern Bulgaria, near the Madara village and 70 km west of the Black sea coastline, where the town of Varna lies. Since 1979 it has been included in the UNESCO World Heritage list.

The high-relief depicts a horseman with shoulder-length hair, riding a horse with a bushy tail. Under the horse there is a dead lion pierced by a short spear. Behind the horse a fine shaped dog, of the same size of the lion, with tail and front paws up on the air. The scene is surrounded by three groups of inscriptions, cut in ancient Greek. Figures were originally covered with a red plaster: most of it is gone, but some traces are still visible. The letters of the inscriptions were also filled with the same plaster. 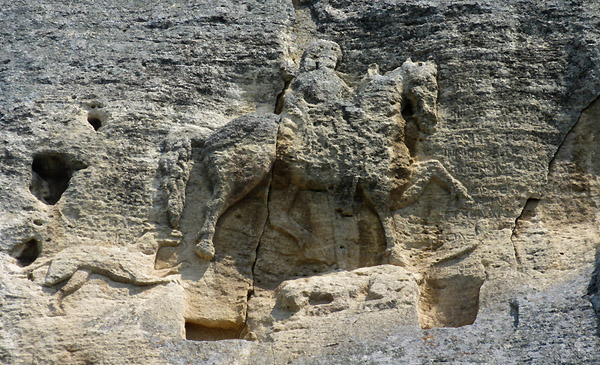 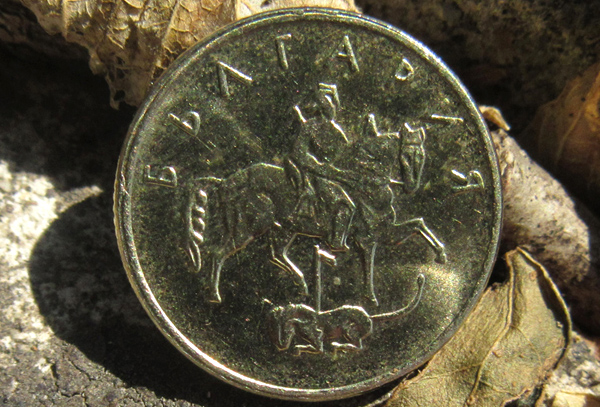 The Madara rider depicted on a Bulgarian coin (AA)

[more pictures? A photogallery is vailable at the end of this short presentation]

The popularity of the Madara rider in Bulgaria is immense: since 1931 all Bulagarians coins (the skotinki) show its image, and in 2008 it was chosen as the national symbol of Bulgaria.

A close-up view of the monument is not allowed; as the metal scaffolding is closed, you may take a look only from the base of the cliff. Despite this, the vision of the carved scene is perhaps even more impressive. From the nearby parking area, the access to the monument is facilitated by the 230 steps of a straight stone staircase.

The surrounding Reserve discloses an impressive natural and archaeological heritage: we may cite only the most important elements, like majestic cliffs, impressive caves, holy springs, an Iron Age settlement of the Getae Thracian tribe, a late antiquity fortress, a medieval architectural cult complex and a cliff church. Archaeological materials found in the caves testify the human occupation since the Neolithic. Dating back to the Roman period, various worship sites has been found. In the Big Cave the base of a stone building and inscriptions testify the cult of the three Nymphs. Still today people collect dripping water, believing that it would allow the blind to see. In a nearby area the stone buildings for the goddess Tyche cult were discovered, with many votive tablets. Dozen of tablets, found all over the area, bear the image of the Thracian horseman, the god of life and death, of hunting and fertility, the most worshipped deity by the Thracians in Madara.

Madara, votive tablets with the Thracian horseman (from Madara guidebook 2009)

The Madara rider was popularly associated with St. George by Bulgarians and Turks. The first scientific mention dates back to 1872: Felix Kanitz, being unable to get close to the engraved rock surface, thought that the inscriptions were in Latin, and assigned the monument to the late Antiquity, interpreting it as the Thracian horseman. In 1895 for the first time a scaffold was erected, and the Czech archaeologist Karel Skorpil suggested that the inscriptions were of Bulgarian origin. He proved that the monument was not Thracian, pointing to the depiction of stirrups, which were not in use in Europe until the VI cent. AD; effectively they are absent in the Madara votive tablets depicting the Thracian horseman. Another element is to be outlined: concerning the Thracian heroes the lion is a companion in hunting, not a prey. And more, the monument was not touched by the colonies of Christian hermits who inhabited the Madara rocks during the 13th and 14th centuries, so demonstrating that it was not considered a pagan icon, like the Thracian horseman was. The inscriptions were later further analysed by other scholars, such as Geza Feher (1928) and Veselin Beshevliev (1935). 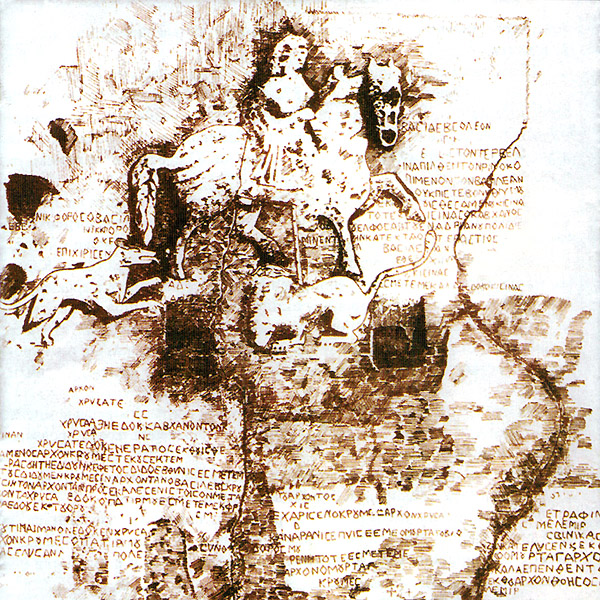 In 1954 the Bulgarian Academy of Sciences organised a complex archaeological and epigraphical research project: thirty scholars studied the high-relief for a month; The carving, which is in a quite bad condition and has some missing parts due to erosion – horseman, lion and stallion heads are effaced – was observed under different light conditions, including artificial grazing light by night. After this detailed studies it is possible to say that the Madara rider depicts a triumphal scene, which is the symbol of the Bulgarian Khan glory over the enemy. The monument was most likely carved by the order of Khan Asparukh (680-700 AD), so celebrating the founding of the Bulgarian state by depicting himself on the huge Madara vertical cliff, a place of worship of centuries-old tradition, so marking a link with old traditions. The three groups of inscriptions, where for the first time the name Bulgarians is mentioned in a Bulgarian monument, date back to the rulings of Khan Tervel (705-707 AD), Khan Krumesiss (738-754 AD) and Khan Omurtag (815-831 AD); they tell how the Bulgarian kings gave support to Byzantine emperors to maintain the throne, who in turn recognised the independence of Bulgaria with the 681 AD treaty.

It is to be outlined that the Madara rider is the only European rock carved monument from the Early Middle Ages. 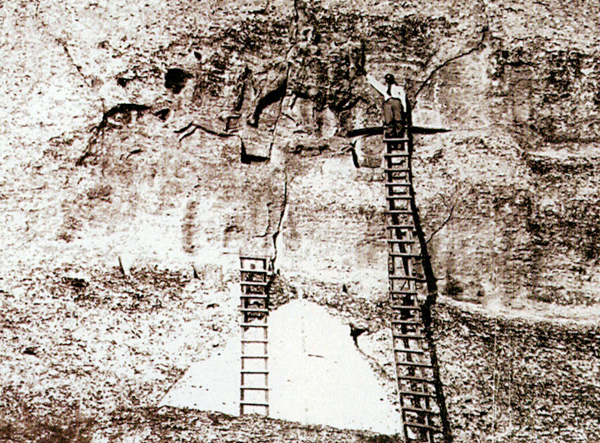 V. Beshevliev studying the inscriptions in 1937 (from Madara guidebook 2009)