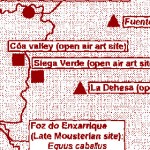 At the request of the editor of TRACCE, I comment here on the text by Robert Bednarik published in number 3, May 1996, of this online rock art newsletter. I do it as a token of consideration toward the editor and the cooperative Le Orme dell’Uomo, an organization that played an important role in rallying international support to preserve the Côa Valley rock art sites.

I am thus breaking the promise of ignoring Robert Bednarik and his writings which I made myself in July 1995, after Portuguese archaeologists campaigning to save the site had been qualified by him, both in his “direct dating” report to EDP (the electricity company building the Foz Côa dam) and in declarations to the Portuguese press, as utterly incompetent.

I realized back that the appropriate scientific forum to discuss Bednarik’s writings was not Archaeology.

The contents of his TRACCE text, particularly as regards the slanderous attack on a profession that won an unprecedented victory in the annals of rock art preservation, comfort me in this opinion. Therefore, I will not comment further on the issues of dating, with which I dealt previously (1)

I will only alert the readers to the fact that, in association with Alan Watchman, Robert Bednarik actively collaborated with EDP to denigrate the importance of the Côa Valley rock art sites and to help in their drowning.

I quote from their letter to the Board of Directors of EDP, dated March 24, 1995, where they offered their services and stated that "if the art were to be shown to be Post-Palaeolithic, its importance would diminish dramatically and the controversy concerning its preservation would be largely resolved".

The editor of TRACCE is in possession of a copy of this letter.

The only issue of relevance that is raised by Bednarik’s statements on the Côa affair and on Portuguese archaeology is wether members of IFRAO, an organization on whose behalf he acts as convenor, and whose journal he publishes, agree with him, or consider such statements acceptable.

I can only hope that IFRAO members will adequately consider the implications of Bednarik’s behavior and act accordingly.