A question of skin 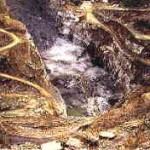 A question of skin: AMS vs. Rupestrian Archaeology?
The second aspect of direct dating experiences in Côa Valley is AMS method. We will refer here to the text recently issued in Rock Art Research volume 12 number 2. 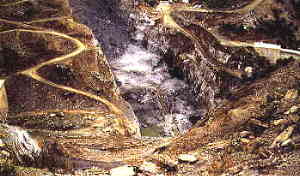 Reading the beginning of this paper we have the impression that the most important problem is to demonstrate the recent antiquity of Côa engravings, and not to stop the damming.

This presupposition pervades all the work, and is yet (March 1995) stated in the double joined offer (Microerosion and AMS method) to EDP Board.

It is claimed soon after that the stylistic Palaeolithic datings of Côa figures are subjective: but the author himself writes that “the engraved figures (of Côa) can be interpreted as simple outlines of cows, horses and goats, and as their unweathered appearances suggests much younger antiquity (pers. obs)“. Is there something more subjective than this “personal observation”? Is there something more inaccurate than not recognizing, for example, that Ribeira dos Piscos horse figure is completely different from actual horses?

A few paragraph after it is stated that “jagged edges of peckings and the sharp V-shaped incised lines indicate that many Côa Valley petroglyphs are generally unweathered, pointing to relatively recent engraving activity, not Palaeolithic“. If we can agree with the first point, it is that Côa Valley pecked dots are well preserved, we can’t agree at all with the consequent deduction: how we can measure the erosion factors? How many environmental variables have been considered? Which calibration curves have been taken to demonstrate this? We have yet underlined this crucial point in the TRACCE 3 text about microerosion method .

We can take a comparison in Alpine and particularly Valcamonica Rock Art. Here we can find very fine linear scratches (0.2 mm large) engraved by the last glacier. We can date glacier retirement no later than 14.000-12.000 BP. So these lines are undoubtedly 14.000-12.000 years old, and lies on horizontal surfaces, exposed every day to direct weathering.

On the contrary the Côa engravings lie on vertical surfaces, often half sheltered, not exposed to direct “beating” rain, which we think we must recognize as the most important factor of erosion. This fact is demonstrated for example in Mt. Bego, where an engraved surface in “Valle delle Meraviglie” has been sheltered by a rock-slip, showing much more “fresh” engraved dots and linear scratches than surrounding rocks.

Our question is: if we can perfectly recognize an "unweathered" 12.000 BP fine line scratched in Valcamonica, how can we claim that "unweathered" (but half-sheltered) "Côa engravings are of "recent engraving activity"?

And more: in Valcamonica we can find many “V-shaped” engraved lines, which we can easily obtain with a silex or quartz point. Why speaking of metal point? Where are the references to experimental engraving tests?

The most astonishing statement is that “the engraved surfaces have not been exposed to the atmosphere for as long as other rocks in the area”, and that “it is possible, though conjectural, that the unweathered joint planes used for engraving were exposed as a result of historic quarrying activities to obtain rectangular stone block“. For the first point it is sufficient to remember that Chlorine 36 analysis (which took part of same “blind test” group) revealed that rock surfaces were yet extant during Palaeolithic period. For the second point we think that every one can immediately recognize historical quarrying activity, above all if producing “rectangular stone blocks”. It is not, with all evidence, the case of Côa Valley engraved surfaces.

The AMS method (acronym of Accelerator Mass Spectometry, a 14C dating method which needs a very small quantity of organic material), when applied on engraved rocks, works taking minimum age from organic material trapped in the base of the film accretion inside the petroglyph, and maximum age from “organics trapped in basal silica on an adjacent surface (off-art)“. 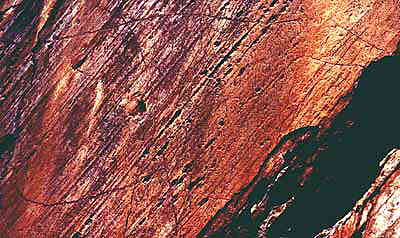 Engraved figure from Canada do Inferno

28 samples were collected at Côa. “AMS 14C determinations for accretions in petroglyphs were surprisingly between 2170 and almost 7000 years old, and their adjacent surfaces were incredibly only up to 2640 years old”.

The surprise is obviously due to the fact that unengraved surface is apparently younger than the engraved one. The solution is found by the author in a carbon contamination, pervading brown silty accretion (inside the petroglpyhs) and not silica skin (outside the petrogylph).

We think that the problem in silica skin formation. It isn’t clear at all. If we state that silty accretion are contaminated, why stating at the same time the absolute stability of silica skin?

And then, how we can assume that silica skin formed only 2000 years ago, when rock-surfaces have been dated 40-270 Ka by Chlorine 36 methods?

The author suggests that “amorphous silica ceased to be deposited on rock surface after hill slope cultivation first started and silt began to wash across exposed rock surfaces “. This time is fixed arbitrarily in 1700 years, showing not a complete knowledge of local archaeology (as demonstrated by J. Zilhao 1995). This date is taken as the maximum age of the petroglyph.

In conclusion the AMS project, working for only three days at Côa Valley (funded by EDP during the dam building), found max 6870 BP contaminated dates in silty accretion inside the petroglyphs, 1460-4340 BP dates in grey-white silica skin in off-art surface.

It took the maximum age (1700 BP) for petroglyphs by the first beginning of slope cultivation, the minimum (100 BP) thanks to grand-fathers memory.

All this complies very well with the fact that petroglyphs show an “apparent recent antiquity suggested by their lack of weathering, scarcity of rock varnish development, negligible lichen colonisation, presence of shallow weathering rinds“.

Is this the reliable scientific method we need in post-stylistic Rock Art Research?