The State of the Research part *** 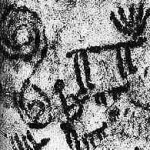 TRACCE no. 4 – by Angelo Fossati

The state of the research: Alpine and Italian post-palaeolithic Rock Art 1990-1995

After the first discoveries of rock art in Austria, about 30 new sites have been discovered in Tirol, Niederösterreich, Salzburg and Stiria… 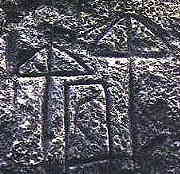 After the first discoveries of rock art in Austria (in the Totes Gebirge mountain) during the fifties, about 30 new sites have been discovered in Tirol, Niederösterreich, Salzburg and Stiria. The major part are in the Salzburg area and are usually engraved by scratching the limestone surfaces using some stone or metal tools. The figurative themes are quite different: we can see cows, dogs and wolfs, horses, deer, goats, ibexes, bears, birds, anthropomorphs, artifacts, crosses, sexual signs, maps, stars, dates and inscriptions. As usual in rock art they appear alone or in association.

The chronology of this rock art is quite controversial: there are two school of research that support different hypothesis.

We think that a middle way can be found between the two different interpretations that seems to be so distant. If it is surely difficult to support the antiquity of the zoomorphic figures of the Totes Gebirge (on the other hand I could not find them standing in front of the rock), it is also hard to confirm that there is no prehistoric rock art in Austria when we see hunting scenes and zoomorphic figures that can be compared with the camunnian rock art or the hallstattian decorated pottery. It is also undeniable that there is medieval and modern rock art, represented by crosses, dates and weapons.

I would like to underline, also, the similarities of the Austrian rock art with the so-called Cimbrian rock art of the Asiago highlands, an area studied during the eighties (3) but newly recorded in 1993 by a team of the Footsteps of Man. It is confirmed that this old population, the Cimbri, during the Middle Age came from the north, from a German region (Austria?): in fact the local dialect, still spoken, is an old German dialect called zimbro. But if the major part of the figures (fig. 18; crosses, little cup-marks, five-points stars) belongs to Medieval or Recent times, and it is the same that we can find in Austria, only few representation can be attributed to the Late Iron Age (topographical and architectural representations) and at Asiago it is completely absent just that phase older and well attested in Austria, in which we can recognize the zoomorphs, the riders and the hunting scenes (4). 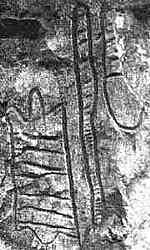 Only the Puglia region, in the southern Italy, has given novelties in the rock art research, due to the efforts of local investigators, like G. Ruggieri, and the interest of the inspectors of the Archaeological Superintendency, A. Tunzi Sisto.

We can find two different situations: one more connected to “parietal” rock art sites, and this is the discovery of some rock shelters or little caves with schematic petroglyphs that are not yet surely dated; the second type of rock art is connected to the engraved boulders, chronologically confined to the Copper Age. 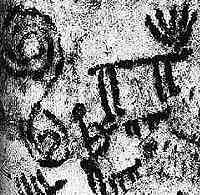 In the first case we must remember the rock shelters B and C of Sfinalicchio, in the beautiful frame of the Gargano: here there are different linear (scratched) figures probably symbolizing the female and male sex (fig. 18).
In the second case we find the anthropomorphic stela of Bovino, where, in addition to the usual iconography of the Copper Age, that is daggers or collars, we can see some engravings: a deer, a goat, a fish, petroglyphs not usually etched in these monuments, but common in those of Valcamonica (5).

We do not have any other news from the most famous cave with rock art of Puglia, the Porto Badisco cave, where P. Graziosi could recognize Neolithic and Copper Age paintings. In this sense it is noteworthy that the Archaeological Superintendency of Sicily is preparing a special conservation program for the Addaura caves (Palermo) (6).

The Balkans, due to the recent political and war problems present only few sites from the Republic of Macedonia (former Yugoslavia). The discoveries have been done by D. Aleksovski of the Rock Art Research Association of Macedonia, Kratovo, that starting from 1992 found some rocks engraved. Aleksovski has attributed these figures to four different phases: while the first three are referred to pre- and protohistoric ages, the last has been ascribed to the historic and Christian period (7).

A word of thanks: I wish to extend my gratitude to the colleagues that have pass to me the information or material without those I could not have written many paragraphs of this article: A. Arcà and the friends of the Gruppo Ricerche Cultura Montana of Turin, F. Ballet, S. Casini, P. Frontini, R. De Marinis, F. Fedele, F. M. Gambari, S. Gavaldo, A. Kopf, L. Mano, A. Pedrotti, D. Seglie and the friends of the CeSMAP of Pinerolo, A. Santacroce, U. Sansoni