The Sun, the Moon and the helping deers 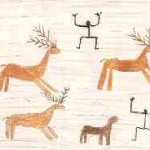 TRACCE no. 4 – by III B classroom of Cena elementary school

This is a tale invented by children during a Rupestrian Archaeology educational workshop in a Turin (Italy) elementary school. 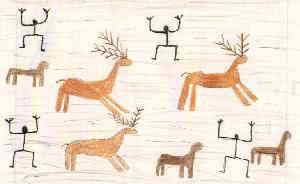 Ra the Sun, a ball of fire, was speaking with Ciro the warrior and told him: -“I love Silvia the Moon very much“.
Then he asked Ciro to help him.
The warrior answered: “To help you I need to call all the animals”.
Don’t worry”, replied the sun.

Immediately Pong the deer, obliged to serve breakfast to its boss, was free. Penny the deer was going to be torn to pieces by the wolf, but he was saved by the Sun. Ra transformed Jon the Hunter into a rock engraved figure, who was going to kill Black the deer. Pincopallino the deer, sad and alone all the time, went along with the other animals and became happy.

Then the Sun put a meadow of flowers in the cart dragged by Uk and Ba, the horses, as a gift for the Moon. 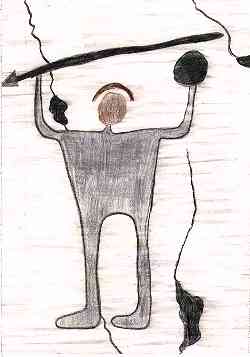 So Ciro the warrior asked the Sun: “How can I go up to the Moon with so many animals?”.
The Sun answered: ” With a beautiful little carpet called Persiano”.
The warrior added: “I need some weapons”, and the Sun replied: “I’ll give you three strong daggers and two axes”.

At last Ciro, the cart dragged by Uk and Ba, and all the free animals set off for the Moon. On the way Ciro found Ur the warrior.

Ur was helping the Comet star who was in love with the Moon to make the Comet and the Moon husband and wife.

Ur blocked the way to Ciro and told him: “You must fight against me if you want to pass and offer your gifts to the Moon”

As soon as the two warriors began to fight, the daggers and the axes competed to decide who would help Ciro against Ur. The daggers won and helped Ciro, but Ur was very strong, and millions of years later, the two warriors are still fighting.

This is a secret story. Only few men living in a Camuno village saw it, many centuries ago, and they thought it was so beautiful that they carved it on a stele, just to remember it. Then they buried the stele. The stele will be brought to light only when one of the two warriors is the winner.