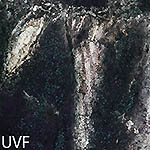 Micro-organisms populating caves produce organic acids that damage and dissolve a calcite substratum. This might have been the primary cause of degradation of numerous Palaeolithic paintings in many caves…

Micro-organisms populating caves produce organic acids that damage and dissolve a calcite substratum. This might have been the primary cause of degradation of numerous Palaeolithic paintings in many caves.

Ultraviolet light source can be used to improve the contrast for it is widely known that many micro-organisms emit intense luminescence under the ultraviolet radiation. The colour of luminescence is more specific when using a 254 nm deep ultraviolet (UVC) source (Bearman et al., 2013), but this kind of light source is not as widespread as near ultraviolet 365 nm (UVA) source. It is also at least two times more expensive. 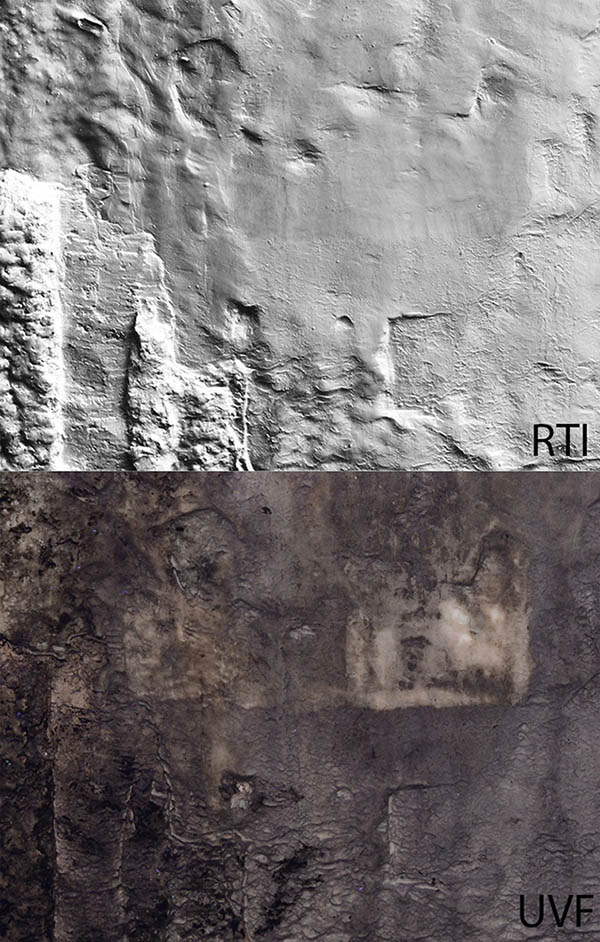 By using a portable LED UVA light source and a high-resolution photo camera, we took the ultraviolet fluorescence images of a series of Paleolithic paintings in Kapova Cave, Russia. The raw files were processed according to the recommendations of American Institute of Conservation (Warda, 2008), followed by the “similar colour” treatment in VIPS software (Martinez & Cupitt, 2005). The destination colour values of colonies in Lab colour space were measured with a digital colour picker.

Resulting images contain only black and white pixels – the black ones are blank pixels while the white ones are the corresponding matching pixels. The precise number of white pixels was found by plotting the histograms of the whole picture or its parts. Comparing images in the visible and ultraviolet light clearly demonstrates a specific spatial distribution of colonies – with minimum colony density on smooth surfaces of the defectless substratum (note that surface roughness was estimated based on reflection transformation imaging (RTI) (Diaz-Guardamino & Wheatley, 2014) whereas the maximum colony density corresponds to the coralloid structures that have a high surface area and are covered by soot.

Some paintings in Kapova were uncovered under thick calcite layers by the restorers in early 1960s. It was found that the serifs on the surface of calcite precisely match the points of colonization by various microorganisms. To preserve paintings, we recommend using both RTI for the control of surface defects and UVF imaging for the accurate count of colonies. Based on these data, it is possible to make reasonable decisions as to what the course of local conservation intervention should be.