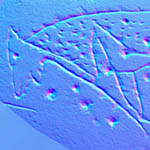 Traditional 3D recording requires expensive equipment as the laser scanning systems, with complex and highly specialised software. These problems may be partly overcome by applying a consolidate technique generally used in quality controls within manufacturing industrial environments: the photometric stereo…

Three-dimensional visualisation was recently found to be very useful in many applications connected with archaeology and cultural heritage, overall including interpretation and analysis, detailed documentation and reconstruction of objects and fashionable museum presentations. However, traditional 3D recording requires expensive equipment as the laser scanning systems, with complex and highly specialised software programs for data analysis and visualisation.

These problems may be partly overcome by applying a consolidate technique generally used in quality controls within manufacturing industrial environments: the photometric stereo. It is a cheap, portable and easily implementable technique: one of the main advantages is the use of common digital photography with portable flash lighting and a software that is simpler than laser-scanning ones for the data elaboration. Furthermore, it provides as output data, in addition to the morphological information of the objects, the map of  brightness and surface colours (albedo), which allows the user to correctly recognize the frescoes and paintings without affections of shadows and surface distortions. 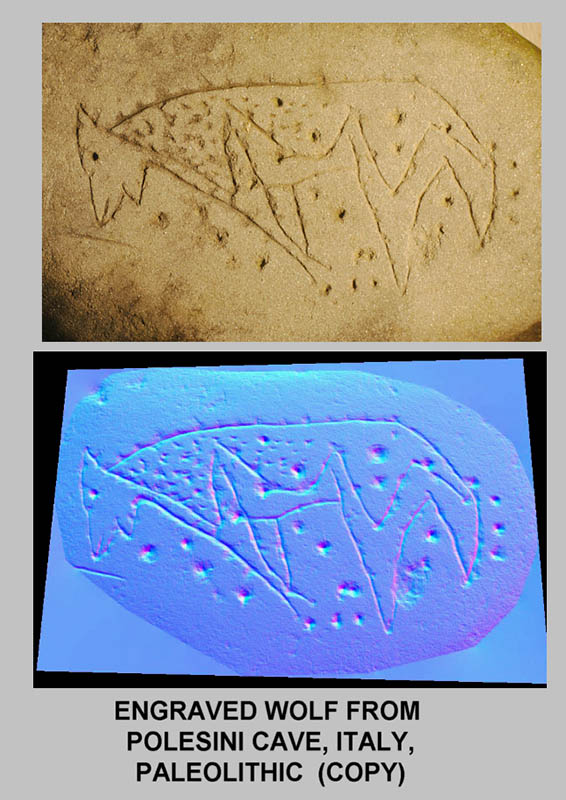 The only disadvantage is that now it works only on planar o nearly planar surfaces, as rock engravings, inscriptions, graffiti or bas-reliefs.

This communication deals with theoretical fundamentals of the photometric stereo acquisitions of surfaces, its practical implementation and the mathematical strategies to obtain the Z(X,Y) morphological data function and the albedo A(X,Y) and the filtering processes to reject graphical noise and artificial distortions. Some application examples on rock-art and other artefacts, as bas-reliefs and medieval graffiti on are presented and discussed.

The basic of the presented technique, known as Lambert’s cosine law, is a property of a rough surface illuminated by a parallel light field source, which all the points reflect the light with the same way. The back-scattered light intensity follows the law B(α) = Bo * cos(α)  where α is the angle measured respect to the normal (orthogonal direction) to the local surface plane and Bo is the intensity along the normal. This implies that the diffused light intensity contains both information of the surface slope in that point and its albedo. 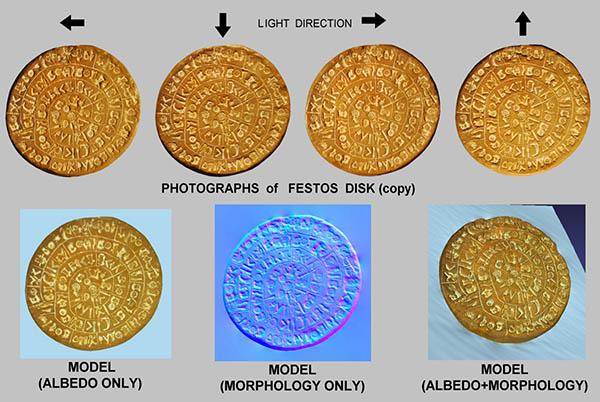 The experimental procedure consists of the acquisition of three or more digital pics keeping the camera in the same position and moving the flash light with a given angle around the subject.  The maps of the X and Y derivatives (∂Z/∂X, ∂Z/∂Y) and the albedo A(X,Y) can be obtained by mathematically elaborating the digital pics. The morphological 3-D functions Z(X,Y) are then obtained from the knowledge of the two derivative fields by means of two dimensional numerical integration. The effects of numerical or optical noise sources can also be rejected by applying suitable filtering with smoothing effects.

The 3D visualisation or morphology-albedo re junction can be performed by using any free-ware software program like MESHLAB.