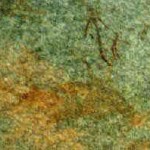 Upside Down Kudu. Away from Western Stereotypes
It has become painfully obvious on analysis of most texts concerning rock art that most scholarly interpretations are skewed dramatically by our western views of the world today. 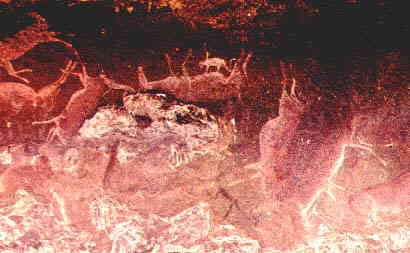 The photo (from A.R. Willcox, cited below, taken near Tynindini, South Africa) shows a herd of eland depicted at various orientations. Despite a figure attacking the belly of one of the most tempting upside down animals which was clearly added by a later artist, this rock shelter demonstrates that the attitudes of depicted objects are not necessarily realistic.

For decades, all the rock art community has ever seen in rock art was a comic book of prehistoric life. Recently, authors have begun to consider that there are many more complex explanations for the rock art, and that rock art played a much more important role in prehistoric life than merely communicating entertaining happenings.

The writer still feels as though most interpretations of rock art are twisted to conform to our modern ideas. This was reinforced recently when I visited a site in Zimbabwe. In the rock shelter (pictured left) there were painted a number of upside down kudu (a kuduis a common antelope of the region). My guide immediately communicated to me that it meant that they were dead. They didn’t look dead. Dead antelope are depicted with blood running profusely from the snout. (1) 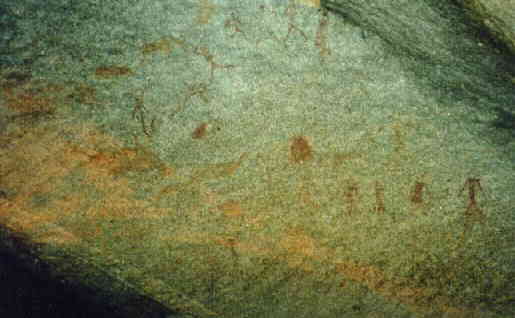 The picture shows a broad view (perhaps too broad) of the rock shelter (near Masvingo, Zimbabwe) in which the upside down kudu may be seen, toward the left side

These kudu had no such thing. They were walking in a manner similar to a normal living kudu (bottom picture). They were, in fact, the furthest thing from being dead. At other sites (e.g., top picture), antelope are depicted at various attitudes, without relationship to a realistic orientation. This has been interpreted as antelope being driven off of a cliff. (2) Again, thinking in western and modern terms, that is the only occurrence in the “real world” of upside down and sideways antelope. However, one must examine the possibility that the rock art was done by a shaman communicating his visions during a trance. (3) The “trance dance” was a ceremony that involved the dancer dancing to the point of exhaustion and collapse so that he could then enter a trance state and be receptive toward religious visions. It is quite likely that during the “trance dance,” one could see antelope in many different orientations wandering about. Bearing this in mind, seeing living, calm, antelope painted upside down begins to make more sense. It is more difficult to find explanations when one examines the world only from the point of view of modern culture.

A more famous and drastically harmful example of this western mind set is the “White Lady” of the Brandenberg, in Namibia. When the painting of a detailed white figure that was of great quality was discovered , it was immediately dubbed the white lady. Scholars of great repute concluded that the painting was done by the Greeks or the Phoenicians. It was taken to prove that the awful suggestion that the beautiful rock art of southern Africa was done by the sub-human Bushman was completely false. (4) In fact, however, the “White Lady” is neither white nor a lady. (5)
It is true that the color of the figure is generally white, but the rock art of the San has rarely used color schemes realistically. The color of the figure is almost never accurate to the subject. Secondly, why anyone ever thought it was a lady is beyond me (male genitalia are quite clear). That painting was used to perpetuate a prejudice against the San for many years. 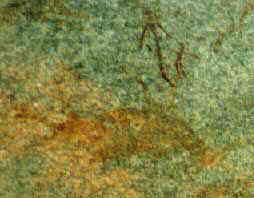 The picture shows more clearly the detail of the upside down kudu. As one may clearly see, it displays no signs of being dead

We look at photographs and see accurate color schemes (I leave alone the fact that we even perceive a difference in skin color at all). We see on television and in the funny papers’ depictions of upside down animals with crosses in their eyes as being dead. It has become an artistic convention (6) for our culture. However, the San artist didn’t take pictures, watch television, or read the funnies enough to have any idea that painting an animal upside down meant that it was dead or that painting a man with white and painting him thinly meant that he was a European female.

When we approach rock art, we must approach it with the mind set of prehistoric hunter-gatherer. Applying modern artistic conventions to rock art, consciously or unconsciously, is a grave mistake, and it has cost us decades of lost time.