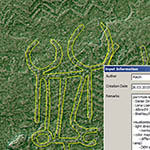 Processed digital copies of the petroglyphs are visualised in order to enable the user to inspect the processed scans of the objects. By inspecting the scans the application provides a mass of functionality for achieving different views into the petroglyphs and their appearance….

Support of Petroglyph analysis
through processing and viewing of 3D scan

Traditionally stone inscriptions or drawings are documented through pictures or rubbings. The latter ones represent an analogue copy of the stone’s surface and its features which are reproduced on paper. The disadvantage of this technique is the physical impact to the stone and the contained elements.

Images reproduce the surface without contact. However, they might be affected by geometrical distortions and need appropriate lighting conditions to show the signs properly. 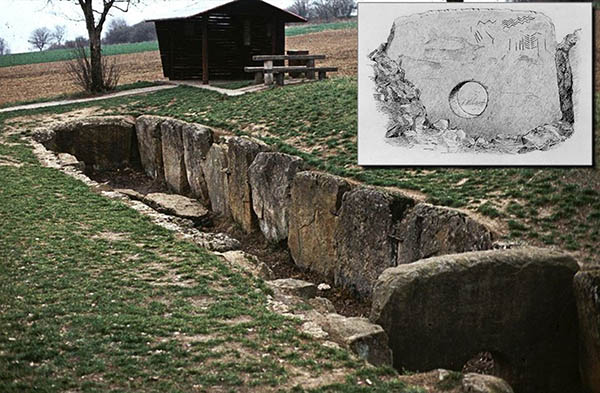 Exemplary dataset: Gallery grave Züschen I (Hesse, Germany) is a megalithic tomb of the so-called Hessian-Westphalian Megaliths and were in use between 3500/3400–2800 cal. B.C.
(Jockenhövel 1976, Boehlau/Gilsa 1898)

These problems will be avoided by means of non-contact 3D measuring techniques, like fringe projection. Such high resolution 3D techniques provide an exact geometrical copy of the original petroglyph, offering better results in legibility compared to traditional techniques. Moreover, it gives a more objective base for analysis and has less impact on the sometimes sensitive and eroded surfaces. Furthermore 3D data allows more extensive and further possibilities in processing and gives better preconditions for the interpretation.

However, depending on factors like resolution, scanned surface and degree of overlap between individual scans original 3D datasets may represent large up to really massive volumes of data. An effective use of such datasets can only be realised if they are condensed and prepared in a suitable way. This means reduction of the data volume, minimising any disturbing influence emerging from the spatial shape of the surface and emphasizing relevant information. The corresponding preparation of the data will then be a good base for a interpretation performed by the human science specialist through an adapted visualization. In addition the data should be prepared for high performance presentation to a wider community via the internet.

Processed digital copies of the Petroglyphs are visualised in order to enable the user to inspect the processed scans of the objects. By inspecting the scans the application provides a mass of functionality for achieving different views into the Petroglyphs and their appearance. This comprises on the one hand a simple 2D viewer for the processed data, and on the other hand a 3D viewer with interactive changeable light positions and water levels as well as a viewer for applying various lookup tables (colour), predefined image filters (convolution) and template matching (matching) regarding individual characters. 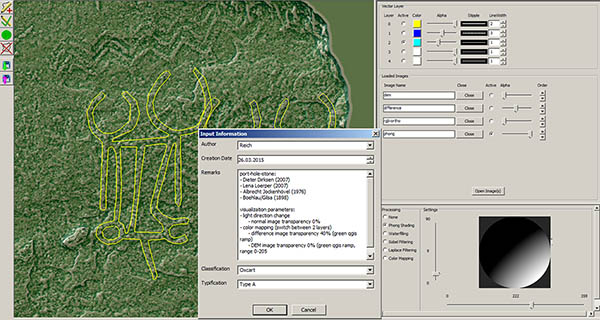 Tool for visualizing, analyzing and mapping of multi-sensory digital data-sets like 2.5D Data,
Photos and maps

Provided functionality of the 3D viewer is based on features of 3D computer graphics. Surface normal vectors from the grey values of the processed scans and a light direction vector from an interactively changeable light source are computed. In addition shading is complemented by water filling, whereby the gray values are limited by the water level selected. Individual modifications are possible to improve the subjective impression by the user, trying to support him in his process of interpretation. Interactive changes of the light source directly affect the shading of the surface and provide a better idea of the 3D surface of the inscription board. Dynamic virtual water filling enables the user to obtain an even better impression of the depth of the individual characters and emphasise weathered characters.

The paper will explain the developed techniques and document its potential at selected data sets.