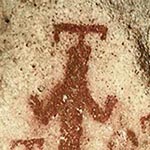 On line petition (please sign it!) to the Turkey Ministry of Forestry and Water Affairs. Discovered in 1994 by the Berlin archaeologist Dr. Anneliese Peschlow-Bindokat, these rock paintings date back to the 6th and 5th millennia B.C.  They are now greatly endangered by increased stone quarrying in the area: the exploitation of feldspar is causing the drastic metamorphosis of the Latmos from a sacred mountain into a source for bathroom installations!

The Beşparmak Dağları, known as “Latmos” in antiquity, is one of the most fascinating and archaeologically richest regions in western Turkey. As early as prehistoric times the Latmos was already revered as a sacred mountain in Anatolia. Upon its peak the Old Anatolian weather god together with a local mountain deity were worshipped. The mountain peak was the centre of weather and fertility rituals. Despite socio-cultural changes that transformed religious concepts, the cultic tradition there continued into Ottoman times. 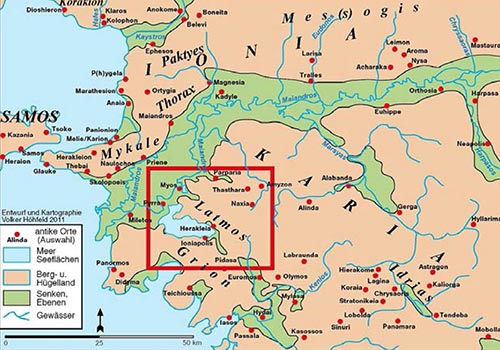 The position of the Latmos site (from “The Latmos Mountains / Beşparmak – A unique natural and cultural landscape is threatened with destruction” – online http://www.latmos-felsbilder.de/pdf/Aufruf_Latmos_eng.pdf)

The beauty of the rock landscape and the cultural monuments that it inspired are now greatly endangered by increased stone quarrying in the area. For several decades feldspar, a rock-forming mineral used for the production of ceramics, glass and sanitary installations world-wide, has been quarried in the Beşparmak. This exploitation is causing the drastic metamorphosis of the Latmos from a sacred mountain into a source for bathroom installations! Tax exemptions and lax mining regulations, especially in the past few years, have enabled quarrying feldspar to expand dramatically, so that sites are threatened of the most important group of archaeological monuments on the Latmos: the prehistoric rock paintings.

Discovered in 1994 by the Berlin archaeologist Dr. Anneliese Peschlow-Bindokat, these rock paintings, dating to the 6th and 5th millennia B.C., belong to the recent extraordinary discoveries in prehistoric archaeology in Anatolia. The repertory of images focuses on family scenes and reflects the changes that occurred in society with the onset of sedentism. The themes and message conveyed by this imagery are unparalleled in the Mediterranean sphere and the Near East.

Baliktas. Detail of the ceiling painting with the scene of a family and its tracing (from “The Latmos Mountains / Beşparmak – A unique natural and cultural landscape is threatened with destruction” – online http://www.latmos-felsbilder.de/pdf/Aufruf_Latmos_eng.pdf)

If the exploitation of feldspar is not curbed immediately, a landscape unique to Anatolia and the Aegean will be lost forever. The Latmos is an Open-Air Museum that covers with its cultural heritage a time span of almost 8000 years. It is also a geo-park, characterised by fantastic rock formations that are rarely found anywhere else in the world, and the magnificent pine forests (Pinus pinea) are the greatest of their kind in Turkey. However, now their number has been severely cut back.

According to the World Wide Fund for Nature (WWF) the Beşparmak with its rare plants is one of the 122 important plant areas of Turkey. Yet, 22 species are seriously endangered: 2 according to general, 6 to European and 14 to national standards. 2 of them are endemic. The Comperia comperiana, member of the orchid family, and the Cyclamen mirabile should be conserved, following the Bern Convention on the Conservation of European Wildlife and Natural Habitats of 1979, which Turkey – among other countries – signed in agreement.

Among the endangered wildlife of the mountains special mention should be made of the wild cat (Caracal caracal), one of the five species of wild cats native in Turkey, and the white-tailed sea eagle (Haliaeetus albicilla).

The cost of making the area appropriate for a low-impact “ecotourism” would not be unfeasible. The local population, whose living quality and basis of existence are threatened by deforestation by quarries, would profit economically from visitors. Most of the inhabitants live from pine-seed-gathering and pine-tree products, bee-keeping, cultivation of olives and animal husbandry. However, today this subsistence basis has become impossible for many local establishments. Furthermore, the fine quarry dust carried by the wind presents a hazard to the population’s health and contaminates the earth, especially through rainfall. Among the communities most stricken by these environmental changes is the village of Karakaya. 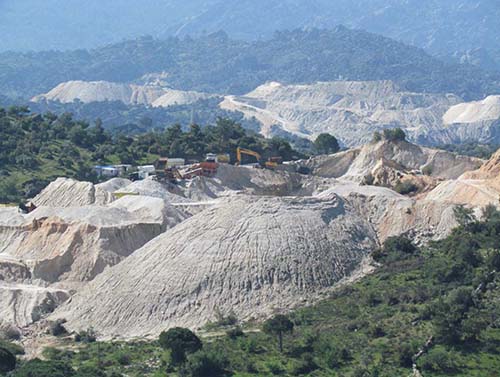 A view of the stone quarries (2013; from “The Latmos Mountains / Beşparmak – A unique natural and cultural landscape is threatened with destruction” – online http://www.latmos-felsbilder.de/pdf/Aufruf_Latmos_eng.pdf)

Feldspar can be found in other regions of Turkey, but the Latmos is singular in its uniqueness and importance for the World Natural and Cultural Heritage. The NABU Deutschland e. V. (Nature and Biodiversity Conservation Union, Germany), the WWF (World Wide Fund for Nature) in Turkey as well as the conservation of nature organisation EKOKODOSD in Kuşadası, further the “Associazione Internazionale di Archeologia Classica (AIAC)” and the “Association pour le Rayonnement de l’Art Pariétal Européen (ARAPE)” have emphasised the exceptional abundance of nature and archaeological monuments in the region.

Due to all these reasons I request that the Latmos Mountains – the Beşparmak Dağları – must be declared a National Park by the Ministry of Forestry and Water Affairs of the Republic of Turkey.

if you agree please sign here the online petition