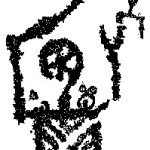 TRACCE no. 5 – by fieldwork participants

Sliding into enlightenment. New fieldwork and research into rock art at Paspardo – Val Camonica
The rocks of La Bosca. A set of surfaces that we would get to know intimately over the next few days. Our task is to discover, record, and catalogue the sometimes enigmatic engravings on these rocks.

When we first encountered rock one it was almost totally covered in moss and lichens. There was just a small section clear enough to show some vague figures; a foretaste of the secrets that the face would eventually reveal to us. The plane of the rock is steep, steep enough to defy the grip of our Reeboks; bare feet would prove to be more adhesive. That’s how prehistoric man did it!
Thankfully, rocks two and three are easier to work on, being of a lower profile. Rock four, “The Devil’s Slide”, is difficult to get to, requiring some trail blazing. While it doesn’t need cleaning, the Devil’s Slide lives up to its name, challenging rock one in inclination.

Rock no. 1. We start on rock one by gently scraping off the moss and grasses growing in the cracks, taking care not to introduce any new scratches.
On the third day we return to find the rock is bleeding rivulets of water from the cracks. A good part of the day is spent patting the surface with paper towels and jamming the cracks in an effort to stop the tiny streams flowing down.

The most important phase is to try and trace the figures. This is done by using the ubiquitous Blue-Tac to stick plastic sheets over the engravings, and then using a black marker pen to fill in the areas that appear pecked. The engravings on rock one are difficult to trace as the rock is often fractured and the engravings very eroded. Consulting the experts often provides varying opinions on what the engravings represent, however, we must try and record what is there the best we can.

A spear, a row of praying figures, a house (Bronze Age - Iron Age). Some engravings are recognisable, others are lost in the degradation of the rock. After five days, feeling triumphant, we photograph the tracings, still stuck over their originals, catalogue the figures, and declare victory!

Rock no. 2. Rock two is particularly smooth and only engraved in some parts. It is not possible to recognise any other potential engravings, as the rock is now partially covered. In the area traced, the moss, roots and leaves were removed.

Situated alongside a path, it is only on the lowest part of the rock that the engravings occur. Some of the represented figures are particularly interesting as, so far, they seem unique in their form: we can in fact recognise a warrior with a wheel in place of head with particularly elaborately decorated armour.

Just beneath there is the confusing figure of a warrior pecked coarsely and uncertainly. There is also another anthropomorphic figure lying down, a crack rendering its legs invisible.

Near to two warriors, in the lowest part of the rock, are two wheels surrounded by other engravings pecked in the same way combining to suggest some of contraption, as yet unidentified.

The warriors can be connected with the style IV 4, IV 5 of the Late Iron Age, dated to III-II c BC.

Rock no. 3. Rock three is in a woody place on the mountainside. The rock, made of Permian sandstone, is of medium size, grey-red in colour, and smoothed by the glacier. It appears in a good state of conservation, with its surface both concave and convex.
After cleaning the moss off, it was possible to see some figures made by pecking, concentrated in the lower part of the rock.
The engravings consist of anthropomorphic and zoomorphic figures; there is also sparse pecking, and a series of lines often underneath other engravings, that form an unidentifiable figure. Among the anthropomorphic figures the following are noticeable: a well defined warrior with well developed muscles, and with a bi-triangular tunic and square shield; a praying figure which may be running; and another with orthogonal limbs and lowered arms; and a “Big Hands”.
The central area is difficult to visualise because of superimposed figures, however four anthropomorphic and two zoomorphic figures (maybe fawns) can be seen clearly.
All the figures can be dated to the Iron age. In the central area the figures are of phase IV 1 (VIII c. BC), the others are of phase IV 2-3 (VII – V c. BC). 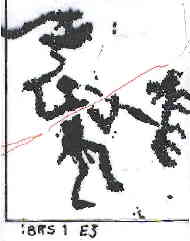 La Bröscaröla del Diaol – The Devil’s Slide. Deep in the forest on the mountainside lies “The Devil’s Slide” used for centuries as an adrenaline producing pastime.
It is thought that the name may derive from folklore associating the engravings with demonic activity.
It was not until 1986 that Giovanni Dassa, a National Park guard, recognised the importance of the intriguing engravings on the rock.

Clues still exist in the landscape, such as dry stone walls and an abandoned early 17th century house, indicating that the area was once inhabited. But now the site can be reached only by a tiring clamber through the undergrowth, thus rendering the site little known.
The use of the rock as a slide naturally cleaned and smoothed the rock but for a few patches of moss. Unfortunately, however, this action also damaged some the engravings so that now they are barely visible, requiring the use of artificial light and mirrors.

Most of the engravings have been dated to the Late Iron Age phases as can be seen clearly from the warriors and axes which mingle on the rock amongst horses and dogs, huts and a wheel, as well a hunting scene; all of which are distributed in groups over the whole rock.

It is also interesting to note that some of the figures are incomplete and that different peck marks can be detected.

Please reach, read and listen to our records!
Thanks to: