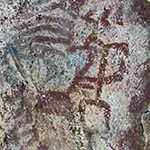 The living environment of the Latmos Mountains and of its communities are threatened by the deforestation caused by feldspar quarrying. The cultural heritage looks back upon a long history, from the Neolithic period up to the Ottoman Empire. More than 170 sites of rock drawings (6th/5th millennia BC) are known, representing one of the most important discoveries in prehistoric archaeology during the past decades in Anatolia. Television documentaries, newspaper reports, symposia and demonstrations, have not succeeded in preventing the devastation of the landscape… please sign the online petition!

A unique natural and cultural landscape is threatened with destruction

The Latmos mountain range (Turkish: Beşparmak) borders on the eastern shores of Lake Bafa in western Turkey and represents one the most impressive landscapes and archaeological abundance on the Aegean littoral (fig. 1, 2). 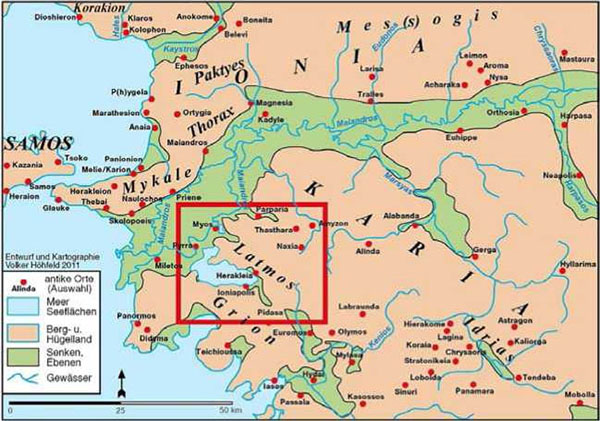 Fig. 1 – Detail in the map of the west coast of Turkey 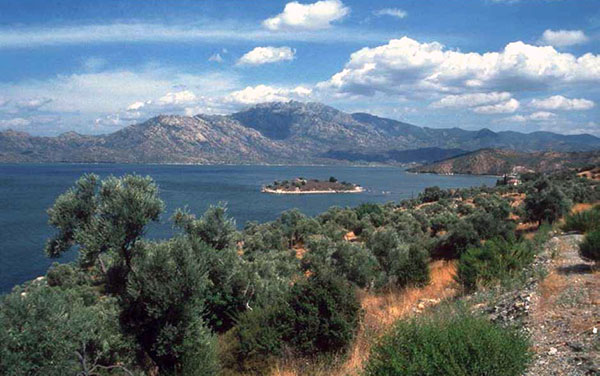 Fig. 2 – View of Lake Bafa from the southern shore; in the foreground the Kahve Asar Ada with a fortified Byzantine monastery of the 13th century AD; in the background the Latmos Mountains/ Beşparmak with the 1375-m-high peak, the Tekerlek Dagi

Since prehistoric times the Latmos was one of the sacred mountains in Anatolia. Upon its peak the old Anatolian rain-and weather-god together with a local mountain deity were worshipped. The prehistoric weather god was later replaced by the Hittite deity Tarhunt and then by the god Zeus of Classical Greece. The local mountain deity lived on in Greek mythology as Endymion, the young shepherd and hunter, and lover of the lunar goddess Selene. The mystical aura of this local cult was ultimately incorporated by Christians, who erected a cross upon the mountain peak (fig. 2-4). 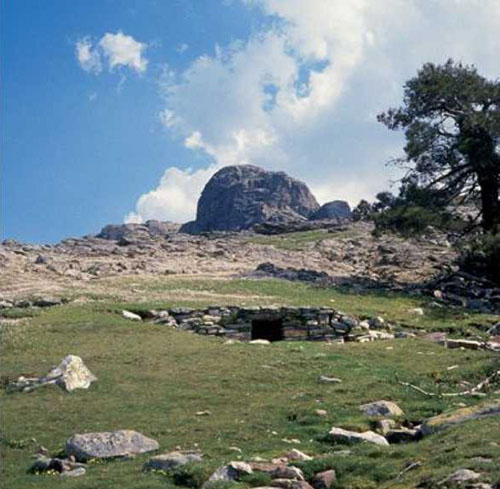 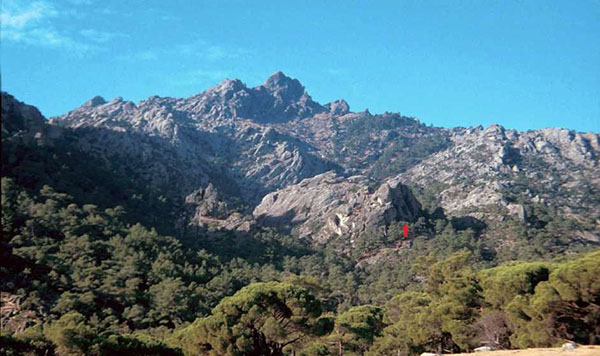 Fig. 4 – View of the peak from the East. The red arrow marks the location of three rock paintings

The Latmos is part of the Menderes-Massif, one of the oldest massifs in Anatolia. Structurally it consists of highly metamorphic and presumably pre-Cambrian rock, granite, gneiss and above all augen gneiss. The weathered appearance of augen gneiss, so typical in regions with a sub-tropical, variably humid climate, is particularly marked in the Latmos and has rendered extraordinary formations to the Latmos mountains, resembling the forms of tame and wild animals, monsters, demons and human faces. All together, they have transformed the mountainous landscape into a “Geo-Park” (fig. 5-8, 13). 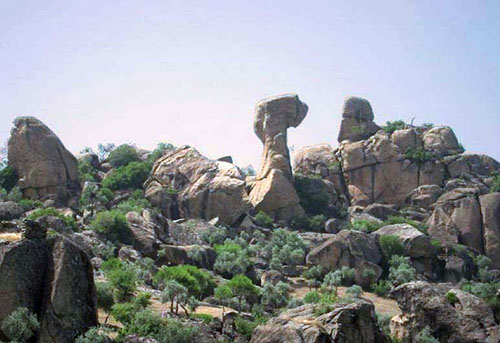 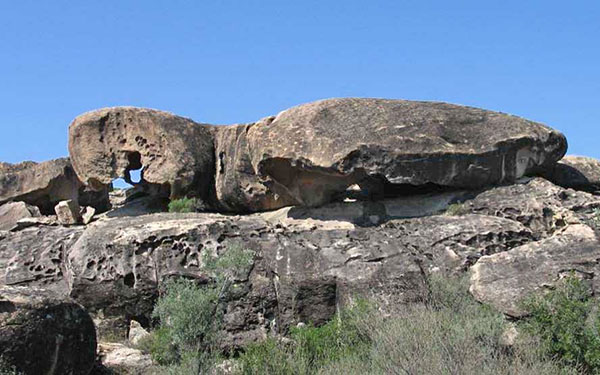 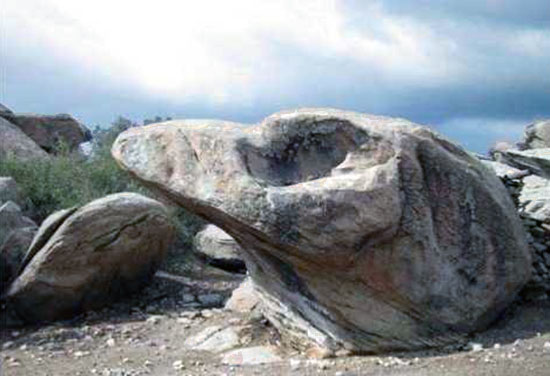 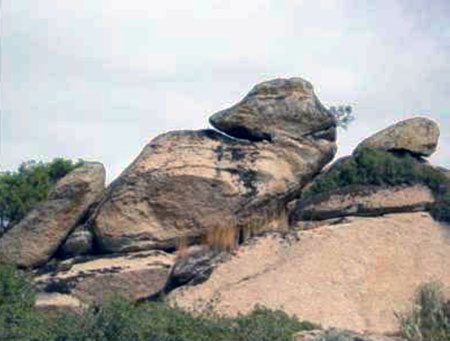 The cultural heritage of the Latmos mountains looks back upon a long history, from the Neolithic period up to the Ottoman Empire. Depictions from the 6th/5th millennia BC painted on the rocks are the legacy of early epochs in time and count among the important new discoveries in prehistoric archaeology during the past decades in Anatolia. Thus far, more than 170 sites of rock drawings are known. Unlike the art of the Ice Age with wild animals, the main theme of these paintings is devoted to human beings, whereas images of animals are an exception.

The contents of Latmos rock paintings reveal the changes that occurred in society with the onset of sedentism in the 11th millennium BC in northern and upper Mesopotamia as well as in the Levant. Although this process extended over a lengthy time span, it is termed the “Neolithic Revolution” and signifies the beginning of our civilisation. Thereby, the Latmos paintings reflect an important step in the development of the new Neolithic way of life in western Anatolia. The theme of the depictions is the human being, not as a single individual but as a member of a community, above all as a pair: husband and wife (fig. 9, 9a, 10, 10b). Some scenes can be interpreted as a wedding (fig. 9, 9 a); others show the pair mother and child (fig. 10, 10b), or processions of women, or groups of dancing women and/or men. There is a noticeable predominance of female figures; it seems that the depiction of females was more important than that of males. Scenes of violence, either against humans or animals, are absent. Indeed, these rock paintings convey an impression of vivacity and contentment to the viewer. The paintings are unique among the multi-facetted rock art of the ancient world. 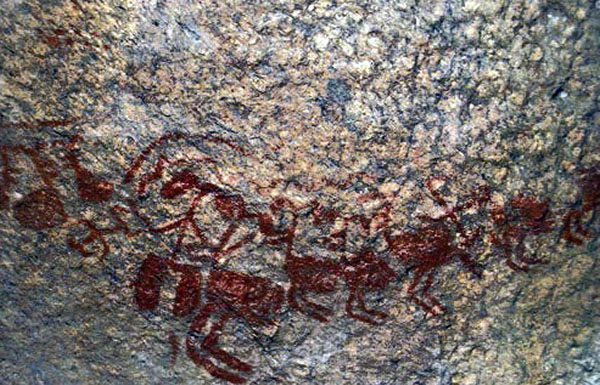 Fig. 9 – Ikizasa. Wedding scene on the ceiling of a cave (enhanced) 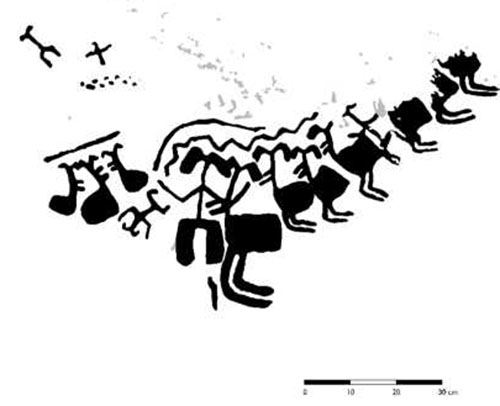 Fig. 9a – Copy of the depiction 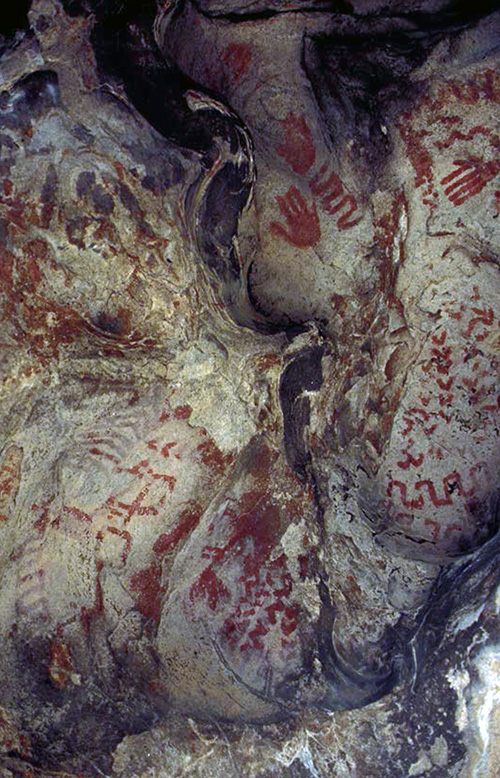 Fig. 10. Baliktas. Depiction on the ceiling of the “rock chamber” (enhanced) 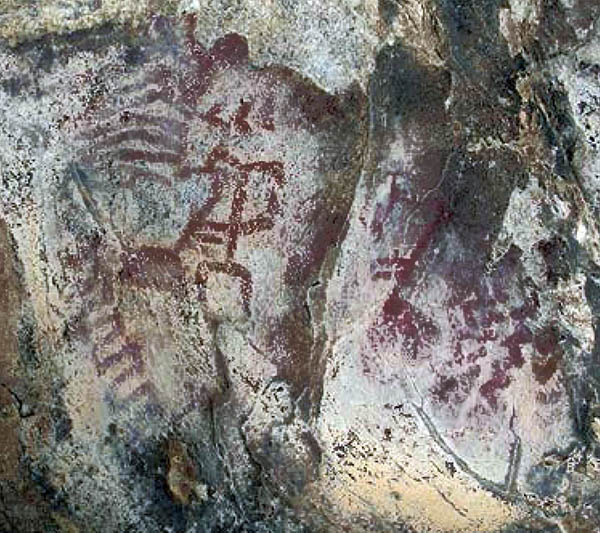 Fig. 10a – Detail of the ceiling painting with the scene of a family (enhanced) 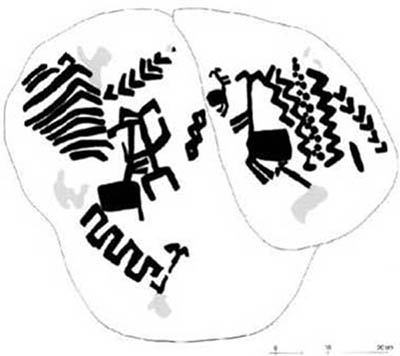 The sites of the paintings are located mainly around the mountain peak, obviously in association with the ritual site there, the seat of the weather-and rain-god and thus centre of the fertility cult. As late as the 10th century AD, processions were still undertaken to the mountain peak in times of drought. At the same time the paintings are linked to the weathered rock forms, which are manifestations of the power of the mountain god. The repertory of pictures arose from the religious beliefs that bonded the inhabitants together with this mountainous landscape. 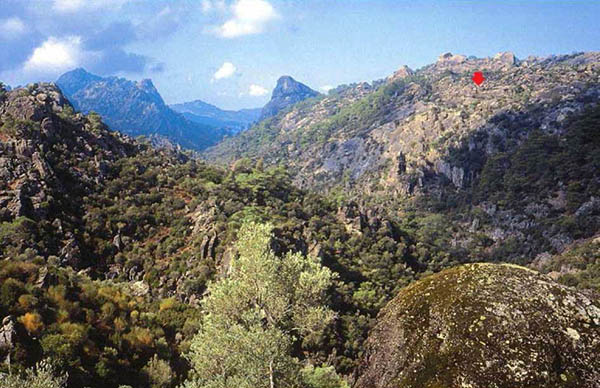 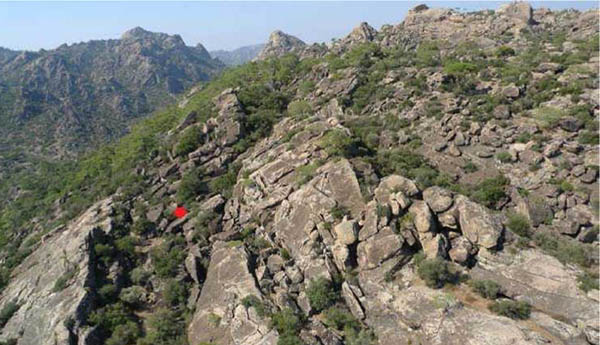 Fig. 12 – Aerial view of the precinct

This contextual bond is most clearly illustrated in the Karadere Cave (fig. 11-14). The cave is formed by a fallen boulder on a terrace on the northern slope of the romantic Karadere (black valley; fig. 11). Together with an open space surrounded by rocks with an entrance in the East, the cave forms a small precinct, which can be conceived as a natural sanctuary and presumably was an important cultic place in prehistoric times, in addition to the peak (fig. 12). 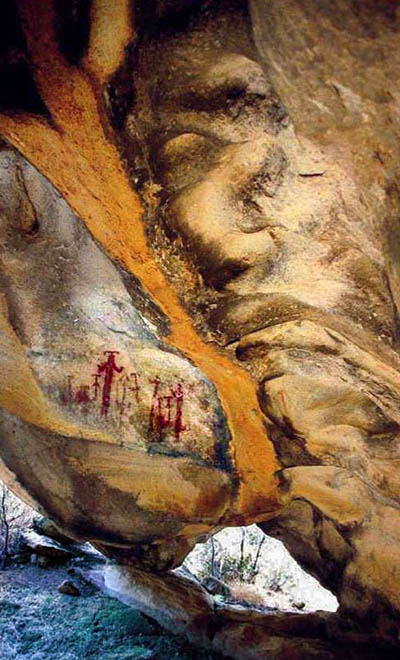 Fig. 13 – Interior of the Karadere Cave 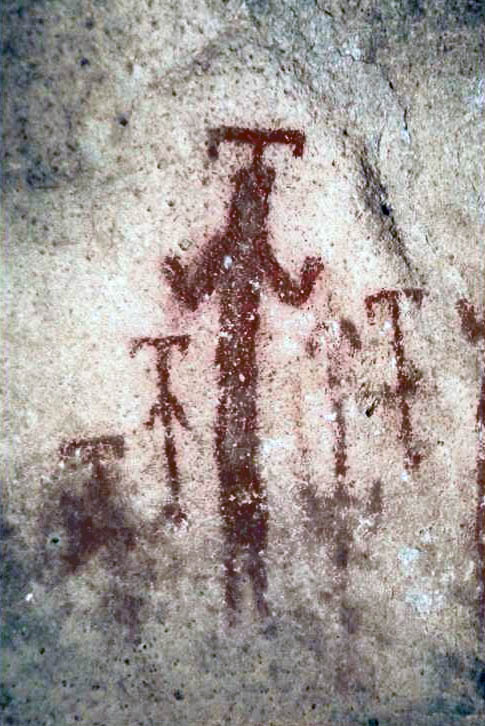 Fig. 14 – Detail of the painting with representation of the weather god (enhanced)

The significance of the cave is underscored by the presence of a plastered floor and a low bench at the back wall. The remaining wall surface is distinguished by weathered forms that relay a mystical atmosphere to the cave’s interior (13). Sitting upon the low bench and observing the depictions, visitors gain the impression that the figures painted in the flat hollows in the cave wall hover above them.

The main configuration is the large male figure painted within a pointed arch-shaped hollow in the weathered rock. He wears a long garment; his arms are uplifted with clenched fists. Upon his head is a T-shaped headdress that should probably signify horns. This dominating figure is interpreted as the personification of the weather god (fig. 13, 14).

This interpretation is supported by a round basin hewn into the rock in the entrance area. From this focal point solely the peak, the seat of the weather god, stands in view, not the entire mountain range. The basin likely served for ritual activities associated with the rain-cult of the peak.

In contrast to earlier hunter-and-gatherer communities, rainfall was of essential importance for the sedentary inhabitants who lived from crop cultivation. 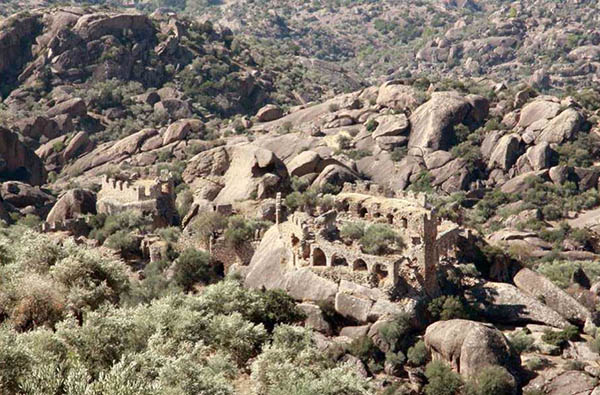 The Latmos remained a sacred mountain until the end of Medieval times. At that time it was called “Latros”. Monks driven out of the Sinai and the Arabic peninsula (today Yemen) sought refuge here in the 7th century AD.

During the following centuries these groups of hermits grew into a centre of monastic life that was comparable with the Greek community in Athos. This is attested by numerous monasteries and eremite dwellings or prayer rooms decorated with frescoes. Thus, in view of the poor state of documentation of this epoch in Turkey, these monuments are of crucial importance for the history of Byzantine art.

The most outstanding, widely renowned abbot in Latros was Saint Paul the Younger, who lived there in the 10th century AD. His monastery, the Stylos-Monastery, where he was also buried, lies below the mountain peak and is known today as “Arap Avlu”.

The monks abandoned the monastery of Latmos after the conquest of Asia Minor by the Turks; however, the buildings were neither destroyed nor built upon, as was the case in many other places. They simply fell into disuse and decay over the course of time. The most impressive monastic ruins are those of Yediler located near the village of Golyaka (fig. 15).

Frescoes painted on the overhanging rock cliff near the Yediler Monastery display scenes from the life of Christ. They belong to the highest quality of Byzantine paintings in Latmos and rank equal to those in the capital of the Byzantine empire, Constantinople (fig. 16-18). 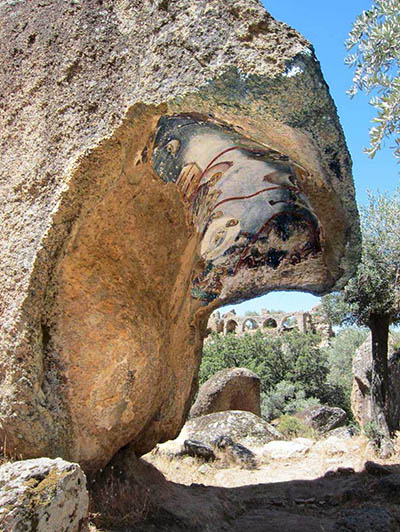 Fig. 16 – Yediler. Rock cliff with Byzantine fresco paintings of the 13th century AD; the monastery is visible in the background 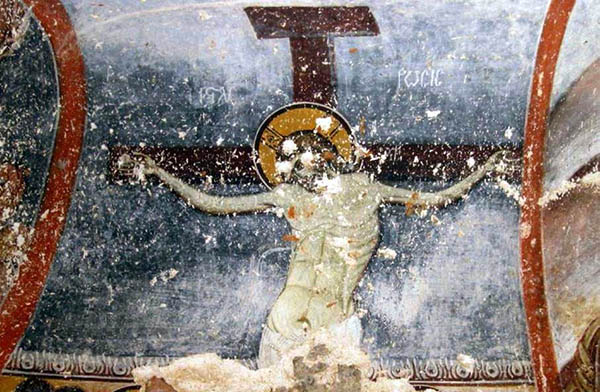 Fig. 17 – Yediler. Detail of the Byzantine fresco depicting the crucifixion of Christ. 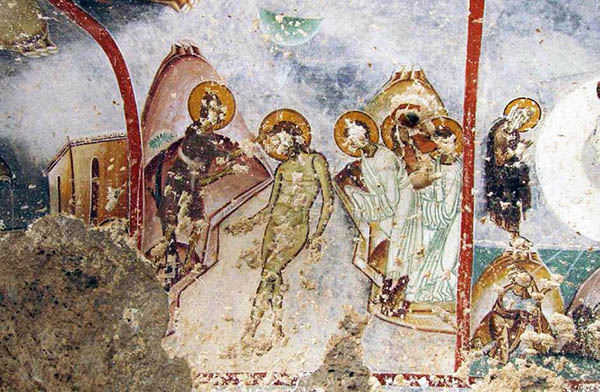 The fascinating rock landscape of the Latmos mountains as well as the archaeological monuments of this region are threatened with destruction by the constant expansion of stone quarries in this area. For several decades feldspar, a rock-forming mineral that is used for the production of ceramics, glass and sanitary installations in Turkey and worldwide, has been quarried in the Beşparmak. This exploitation has increased dramatically in recent times, so that now not only parts of the wonderful pine forests and fascinating rocky landscape have been damaged, but also sites of rock paintings are endangered too (fig. 19-21). 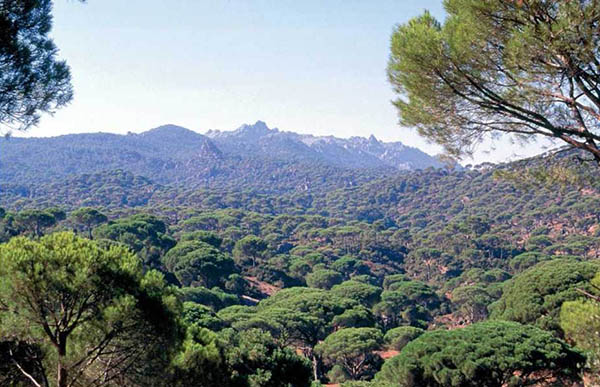 Fig. 19 – View from the Northeast on the pine forests of the Latmos with the mountain range and the peak in the background (photograph taken in 1994) 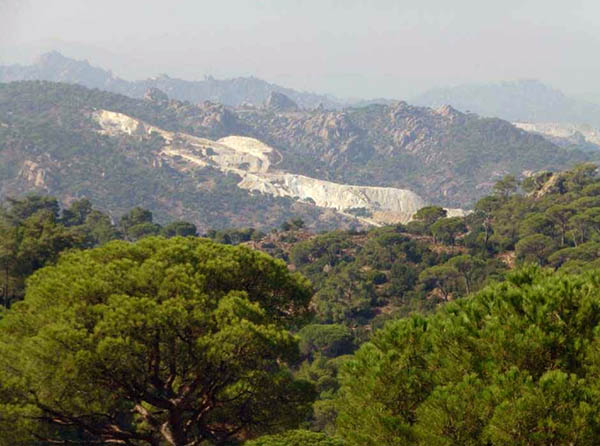 Fig. 20 – Same view from nearby with the peak in the background and the stone quarries in the foreground (photograph taken in 2012) 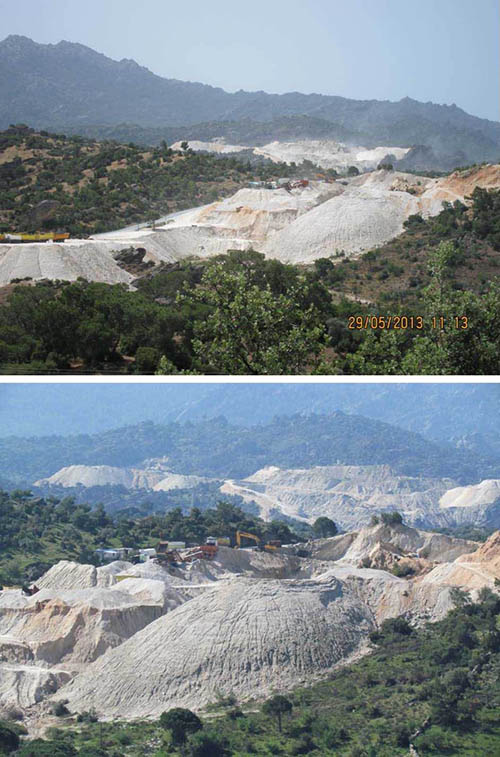 Comparison of photographs taken in 1994 of the magnificent pine forests and fascinating rocky landscape of the mountain range and peak (19) with photographs taken in recent years (fig. 20, 21b) immediately and distressingly reveals the extent of devastation caused by the exploitation of rock within a short period.

The Latmos is an open-air museum that covers almost 8,000 years in time. It is also a Geo-Park, a fantasy-filled landscape, scarcely found anywhere else in the world. The cost of making the area appropriate for tourism would not be unfeasible, and the local population would profit economically from visitors. Now, however, the living environment and basis of existence (among others, pine-seeds and pine-tree products, bee-keeping) of these communities are threatened by the deforestation caused by quarrying. Furthermore, the fine quarry dust carried by the wind presents a hazard to the population’s health.

All of the efforts undertaken thus far to save this natural and cultural heritage by applications for declaring the region as a historical national park or entering it in the List of World Heritage of the UNESCO have been to no avail. Television documentaries, newspaper reports, symposia and demonstrations, have not succeeded in preventing the devastation of the landscape. Feldspar is found in other parts of Turkey; there is only one Latmos – it is unique. And it is the heritage of mankind. Therefore, it is our duty to care for this landscape and preserve it for future generations. 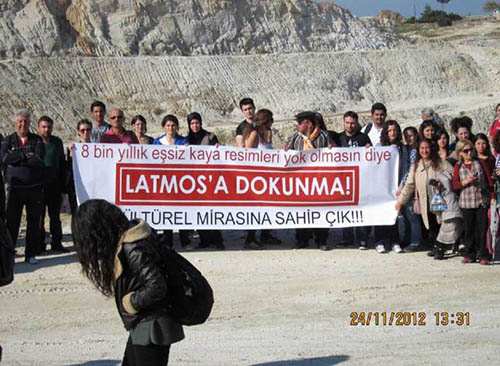