The Graffiti in Camunnian Rock Art 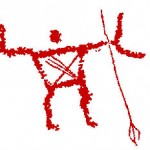 TRACCE no. 6 – by Elena Marchi

Valcamonica Rock Art is constituted of thousands of engravings. Prehistoric man chose, as support for the figures, almost always a sedimentary rock, compact, reddish-grey, perfectly polished by the glaciers: the Permian sandstone.

The engravers utilised two techniques: the pecking and the “graffito” (scratching, Italian). The first type of engraving is the most diffused in Valcamonica and it is made by pecking the rock directly or indirectly with a point harder than the surface. The second technique consists in scratching the rock with a lithic or metallic tool.

The engraving is not very deep and not very visible to the naked eye. But if you scratch repeatedly the same line you obtain an engraving with V o U section, sometimes also very deep and evident, called polissoir (“smoothing” in French).

Probably, even if rarely visible, the “graffito” technique has been utilised to prepare the figures: first the outline was scratched, subsequently the figure was filled in completely with the pecking. During the archaeological excavation to uncover the engraved rocks some pebbles of river and some pointed fragments of quartz were found, probably utilised for engraving. It is possible to suppose that rarely the artists used metallic tools. In any case in the graffito technique, also called “filiforme”(Italian), they often utilised metallic tools that scratch the rock better.

In Valcamonica we can find fewer graffiti than pecked engravings. The appearance of the graffito technique is later than the other one, as it is possible to see in the chronological section.

The graffiti in Valcamonica are in any case thousands and almost always the figures have inferior dimensions than the other pecked ones (sometimes they measure only few centimetres).

About the geographical distribution of the graffiti, it is possible to observe their distribution in some areas, as if prehistoric man chose some special sides in which to practise this technique. The scratched figures take up extensively the rock surfaces of the right orographic side of the Oglio river, in the localities of Redondo, Dos del Mirichì, Pia’ d’Ort (in the Capo di Ponte Municipality) always in association or in juxtaposition with pecked engravings.

Anyway on the rocks of the left side of the Oglio river this engraving technique is not completely absent. In these last areas the artists utilised not very frequently the graffito for making whole figures (Dos Sulif), usually to finish the pecked figures or to outline some particulars of the clothes or of the armour. The oldest scratched and polissoir engravings are just on this side (Termen, Dos Costapeta). There is at the end a last area, probably the most important, that is notable for the exclusive presence of graffiti: Piancogno.

The oldest scratched engravings in Valcamonica are some engraved halberds in some rocks of Termen and Foppe di Nadro sites (Ceto Municipality), and some spears on the rocks of Dos Costapeta in the Paspardo Municipality (1000 m altitude).

Sometimes by re-using some natural lines, scratched by the glacier, man of the Bronze Age engraved the long poles with the polissoir

technique adding then the points with the scratched technique, with a great deal of care in the execution.

On the basis of the typology it is possible to establish their pertinence at different chronological phases: the halberds can be attributed to the old Bronze Age; the spears are of two kinds: the “leaf of laurel” kind can be dated to the Medium Bronze Age and the flamboyant point kind to the Final Bronze Age.

The scratched engravings of the Iron Age are much more numerous: in this period in fact, from the 6th cent. BC ownwards, the scratching is used as a technique independent of the pecking. The themes are the same in both techniques: hunters, warriors or duellers, riders, animals, weapons (knives, swords, spears), star with five points, inscriptions and alphabets.

Their dating is possible thanks to the study of the superimpositions among the other pecked figures and especially for the analysis of the typology of the figures of weapons.

Some knives, engraved on rock 20 of Redondo in the Capo di Ponte Municipality, are very important for the chronology: they are in sheath with the anchor-shaped cap, probably used to save the point of the blade. These figures, like all scratched engravings of this rock, except for a Latin alphabet, are covered by hammered representations, a few of which of style IV 3 (5th-4th cent. BC). This fact permits a dating of the graffiti in the same or immediately preceding period.

The typology of the knives with sinuous sheath and with the anchor-shaped cap can be compared with some knives of the Este area (Benvenuti, Belluno, Franchini property, Ricovero house of Este daggers), and with the dagger of Brembate (Bergamo), all datable at the end of the 6th cent. BC or at the 5th cent. BC.

In the Pia’ d’Ort site, north-west of the Redondo area, there are other numerous scratched engravings, among which knives in the sheaths of a different typology compared to those of Redondo: in this case they are of the Introbio kind, dated to the 1st cent. BC. Knives of this kind and of this same period are scratched in the Piancogno area near graffiti of swords and Hellebardenaxt

with a half-moon cutting edge, which confirm a dating at 1st cent. BC – 1st cent. AD.

The inscriptions in the Camunian alphabet (called also “alphabet of Sondrio”), scratched on the rocks, are very numerous: they have been found in the Piancongo area and in the Capo di Ponte area on the right and on the left side of the Oglio river. Their chronology goes from the end of the 6th cent. BC to the arrival of the Romans.

About the scratched technique there are some non figurative engravings which are connected with particular jobs or usages: the sharpeners (series of parallel and vertical lines) use probably for sharpening some stone or metallic tools and the concentric circles made perhaps, in accordance with suggestive interpretations, by a pottery-wheel. These last signs are always on flat rocks on which man could work the pottery with a wheel. The pottery processing near the engraved rocks can have a ritual meaning, but for the moment only unimportant pieces of pottery have been found near the engraved rocks.

(*) This paper was presented as poster at U.I.S.P.P. XIII Congress, Forlì September 1996