On the occasion of the Valcamonica summer fieldschool

With its new look, this issue of TRACCE  Online Rock Art Bullettin publishes a special edition dedicated to the lectures held during the 2015 summer school in Paspardo, Valcamonica. 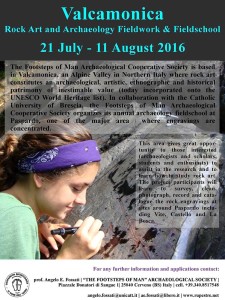 As any reader may notice, contributions embrace a very wide spectrum of subjects, in order to offer a multidiscplinary approach. Every year several archaeologists and academics held lectures which now being published.

This special issue contains a contribution by Ceci and Roncoroni about deviant burials, introducing us into a debate about belief systems, and one by Camuri who discusses the meaning of landscape in art. Two other essays are mainly focused on rock art from different countries: the first, by Giorgi, presents rock art in Australia and its interpretation and spirituality; the second by Sigari, offering a synthesis on goat figures found at rock art sites in Iran. We then close this special issue with a contribution by Prays, Lang, Kaupenjohann and Gundelwein, who present a palaeoenvironmental study in Sudan, relating to the building of a fortress and water resources affected by changes in the climate.

Finally special thanks to all those who decided to contribute, looking towards a new development of TRACCE. The plan now is to continue publishing special issues dedicated to specific topics and transcriptions of lectures held during fieldschools.

The entire issue is under Creative Commons licence, as we believe that in this way knowledge may be easily shared.