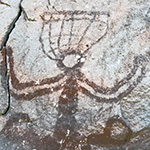 In 2013 Mario Giorgetta, an academic botanist from Switzerland, discovered for the first time a small rock panel with a collection of clearly associated pictographs on a rock cliff in the gorge of the Río Vilama. Mario reported the site to me in 2019 and we agreed to publish a paper describing the panel and its context. This paper comprises two parts. The first part is written by Maarten van Hoek and briefly attempts at interpreting the elements that make up the pictograph scene and the second part is independently written by the discoverer of the pictograph panel at Guatin, Mario Giorgetta. 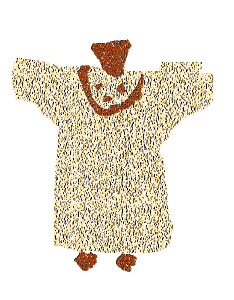 The Desert Andes (the westernmost coastal strip of South America) is very rich in rock art sites. In rare cases specific images occur at selected sites, often separated by long streches of the desert. Two telling examples are the Avian Staff Bearer and the The Enigmatic Traveller (both published in TRACCE). This study examines another “travelling” icon: The Frontal Insignia-Tumi that is found from Tamentica in the south to – surprisingly – Toro Muerto in the north of the Study Area, a distance of no less than 630 km (as the crow flies).

END_OF_DOCUMENT_TOKEN_TO_BE_REPLACED

The Atacama Desert and the Andes in South America are crisscrossed by myriads of paths and tracks. Often those tracks are easily seen in Google Earth as broad bands. Also rock art images narrate of such travels. They mainly depict camelids guided by people. In rare instances however a specific kind of traveller has been depicted on the rocks. I have labelled it ‘The Enigmatic Traveller‘. In this study I describe the distribution of this icon, compare it with similar images and try to explain the meaning of the enigmatic position of the arms of this figure.

END_OF_DOCUMENT_TOKEN_TO_BE_REPLACED

This paper investigates a well-known but rare icon from the rock art of the Atacama Desert. It concerns a group of anthropomorphic figures displaying a very specific bird-related element. For that reason Juan Chacama and Gustavo Espinosa speak of ‘hombres-falcónidas’, ‘raptor-men’, to describe this class of anthropomorphic figures. Remarkably, their interpretation seems to be generally ignored by several archaeologists and rock art investigators. This study presents a revaluation of the theory put forward by Juan Chacama and Gustavo Espinosa in 1997.