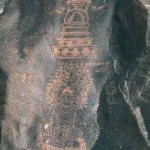 Rock Carvings and Inscriptions along the Karakorum Highway (Pakistan).
Shortly after the construction of the Karakorum Highway connecting Pakistan and China through the Himalayan and Karakorum mountains, in 1978, Prof. Karl Jettmar (Heidelberg, Germany) and Prof. A.H. Dani (Quaid-i-Azam University Islamabad, Pakistan) discovered thousands of petroglyphs and inscriptions along the Indus valley.

These are mainly concentrated in the area east and west of the village of Chilas (Diamir Distr., Northern Areas of Pakistan). A joint Pakistani-German research project was founded and started its first surveys in 1979. Since 1982 the project is maintained as a research cell by the Heidelberg Academy for the Humanities and Sciences. The systematic documentation and publication of this material has been executed since 1989 under the directorate of Prof. Harald Hauptmann. The project keeps a close collaboration with scholars from Pakistan, England, France and Germany.

The aim of this research is a complete documentation and publication of all major rock art sites in this region. An archive of the collected material is installed in the Heidelberg Academy. A duplicate of it will be built up in Pakistan, e.g. in Gilgit.

The publications are presented in two series:

Up to now about 30 sites are registered on a stretch of ca. 100 km to both sides of the Indus bearing ca. 30,000 petroglyphs and 5,000 inscriptions in more than 10 writing systems. The carvings are pecked or chiseled into the darkbrown varnished surface of the boulders scattered on the river banks and the terraces of the valley.

The earliest examples of Indus valley rock art are dating back to prehistoric times. The most recent (besides modern ones) belong to the period before the Islamization of the region in the 14th to 15th cent. AD. 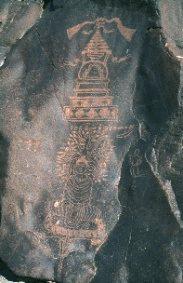 fig.2: Stupa and Buddha under the Tree of Enlightenment from Thalpan

The Buddhist phase starts around the 1st cent. AD and lasts until the 9th or 10th cent AD. The main subjects represented in the carvings are stupas, Buddhas and other Buddhistic symbols (fig. 2).

Another important element of this period are inscriptions, mostly consisting of personal names and dedicational phrases. The majority of the inscriptions are executed in Indian scripts like Brahmi, Kharosthi and Proto-Sarada (Fig. 3). Of special interest are those in Sogdian (ca. 700), Chinese (13) and Hebrew (1).

The old paths along the Indus valley constituted a branch of the Silk Road system. Many of the carvings of this period were therefore executed by travelers like merchants and pilgrims from Central Asia, China and India. But there are a lot of carvings obviously made by the inhabitants of the region as well.
During the 9th or 10th cent. AD, the Buddhist belief was replaced by a new socio-religious movement. Axes and sun-symbols are the new signs of this last major phase of the Indus valley rock art.
The complex of rock carvings and inscriptions in the upper Indus valley provides a remarkable source for the study of the cultural history of Central and South Asia.