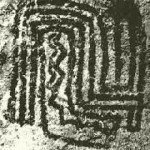 The activity of painting or engraving rocks in Colombia may have begun before the formative period. The scarce references seem to refer to activities which occurred much sooner than just a few years before the appearance of Spanish conquistadors.

The differences in rock art themes, the variety of zones, the diversity of picture forms and engravings, seem to indicate that there existed long periods of rock art activity from the paleoindian to the classic Muisca times. In 1970 investigations by the GIPRI group began. The focus during the early years was in the search, study and preservation of national rock art zones. The work began in the eastern central zone, in the high plains area of the states of Cundinamarca and Boyaca. The first expeditions (1970-1975) had the aim to confirm the ancient references and descriptions of Spanish chroniclers of the 19th and 20th centuries.

The GIPRI group has developed some unique systems and procedures of recording and documenting rock art. The adaptation of the Frottage system (Priuli-Novoa), the use of a field record sheet, and the digitalisation of images, are some of the procedures used to record rocks and zones. Each rock, and each painting or engraving is registered with all its attributes on a field record sheet which is complemented with ethno-historic studies: the history of the area, terror stories, aesthetic traditions, associated medical practices and archaeoastronomical alignments. RESULTS:

Pictures (from top, taken from RUPESTRE no. 1, by courtesy of GIPRI):