The petroglyphs and pictographs of Oman are little known, but for the last five years I have been involved in a series of surveys of the Jebel Akhdar Mountains that have resulted in the location of several important sites. Recording these in advance of construction projects undertaken to modernize the country’s transportation network has enabled me to study the rock art in considerable detail for the first time. Using superimpositions, cross-dating with known artistic expressions elsewhere in the region, and the known dates for introduction of various objects of material culture, I propose a preliminary chronology consisting of four major phases spanning the last 6,000 years.

Rock Art in Oman was first reported in the thirties (Thomas Sidney 1932), when the British explorer Bertram Sidney Thomas on his camel journeys in the Sultanate, noted its presence on rocks in the wadis (deep arroyos) that characterize the country’s desert topography. The first scientific interest in this subject arose only in the 1970s with brief studies (Clarke 1975, Preston 1976), especially focusing on Hasat Bin Salt (also called Coleman’s Rock), a unique and interesting natural feature that has many petroglyphs but is better known for a bas-relief carving that creates a monumental sculpture on three side of the large rock (Yule 2001) (fig. 1). 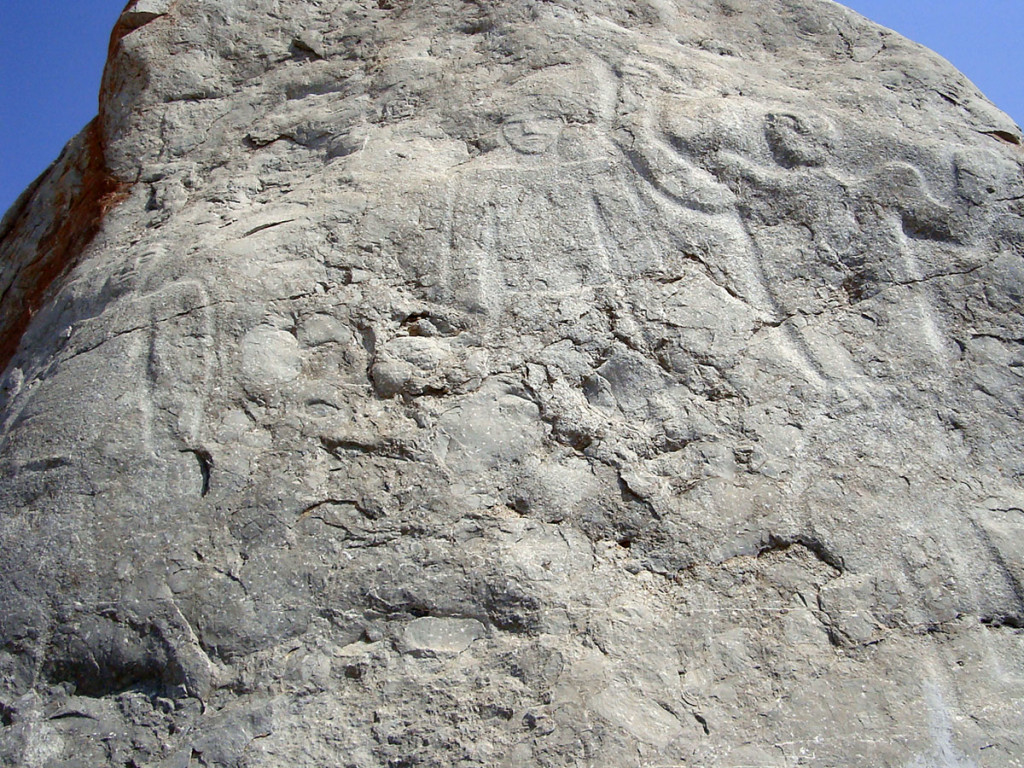 Fig. 1 – Figures realized in bas relief. These figures are on the most known piece of rock art in Oman, a boulder naturally shaped as a gigantic standing stone – Hasat Bin Salt (Coleman’s Rock) – (photo by Angelo Fossati)

In spite of the evident historical, archaeological, and anthropological importance of this rock art corpus, a complete catalogue of the country’s petroglyphs and pictographs has never been created. In the last five years I have carried out a series of surveys in the Jebel Akhdar mountain range for the Omani Ministry of Heritage and Culture with the aim of starting and organizing such a catalogue (Fossati 2009, 2013). Rock art is also known in the south of the Sultanate in the Dhofar region, where it also occurs as both paintings and engravings (Ash Shahri 1994).

Omani rock art—made as petroglyphs using several techniques including percussion, incision, and bas-relief carvings and as paintings—presents numerous themes including humans, animals, artifacts, geometric/symbolic figures, and inscriptions (Jäckli 1980). These various sorts of carvings and paintings were made over a long time period. However, the establishment of a chronology for this art depends on the study of styles, distinguishing different types of weapons, and demonstrating the presence of certain animals in various scenes. Currently I am only at the start of my analysis of the data I have recorded, but I offer here a few preliminary observations. As is often the case in rock art research, the analysis of superimpositions between figures and the comparison of different levels of revarnishing (on the same surface) has helped with the organization of phases into general time periods. 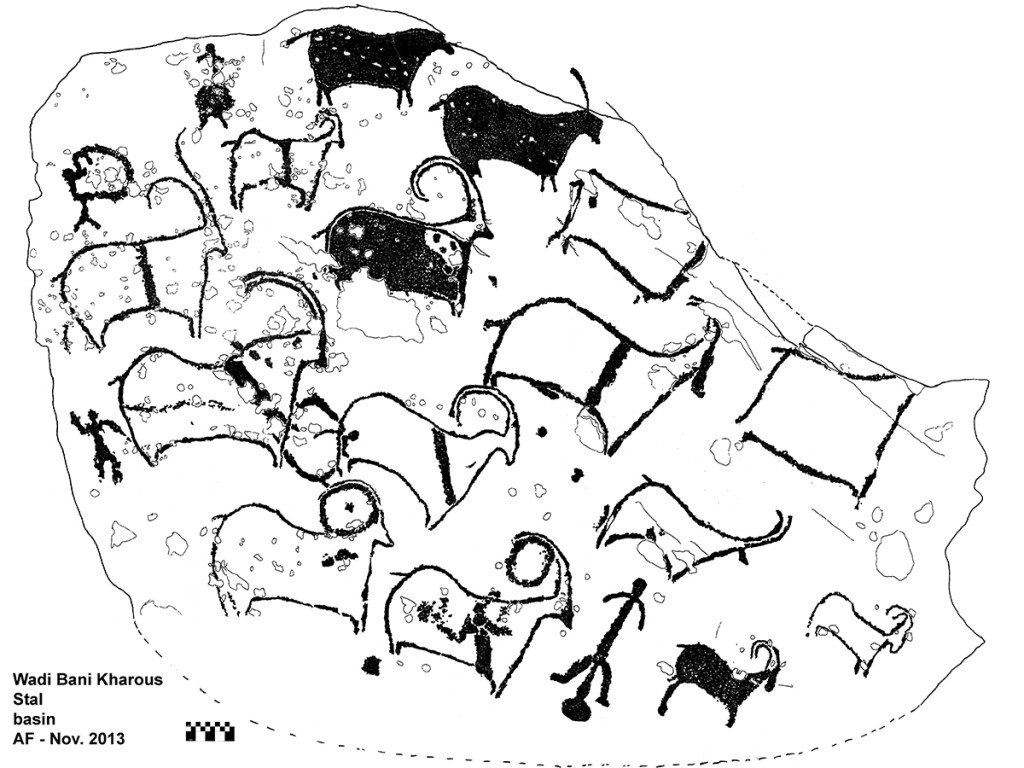 Fig. 2 – A group of goat-like animals and human figures engraved in a rocky basin. The goat-like figures overlap a figure of green turtle, an animal that had a great symbolic value six thousand years ago – Stal, Wadi Bani Kharous – (drawing by Angelo Fossati)

The most ancient rock art in the region illustrates wild animals such as green turtles, wild ibex, gazelles, asses, aurochs, and other animals (fig. 2, fig. 3). Sometimes these images are heavily revarnished and weathered (fig. 4). 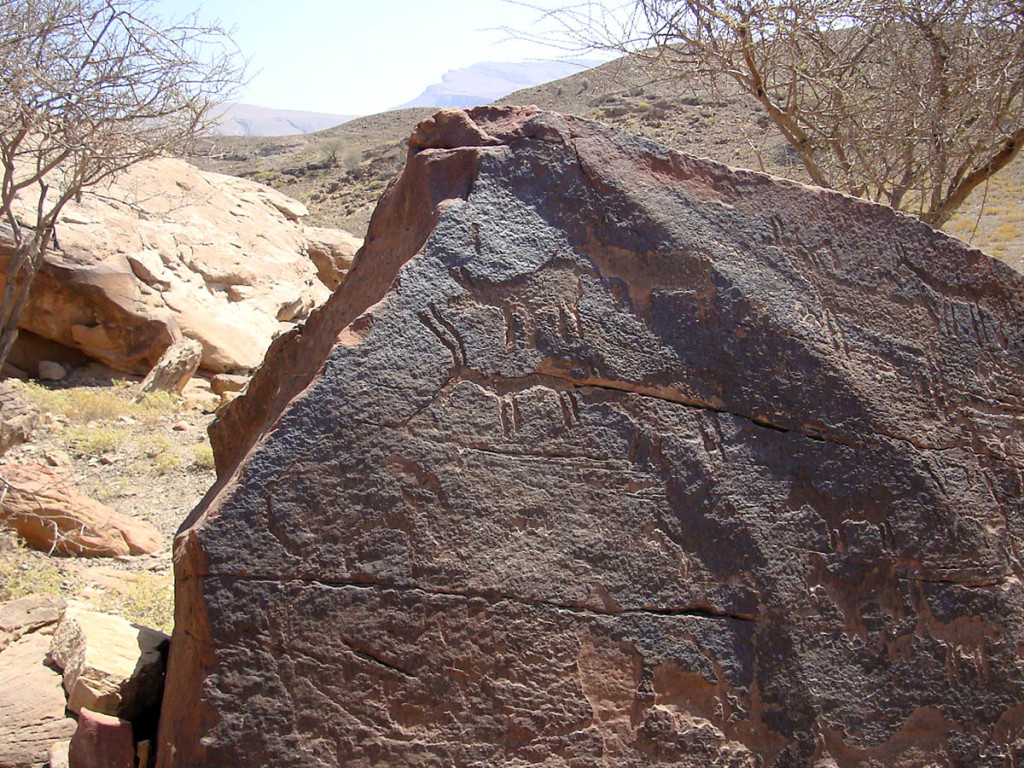 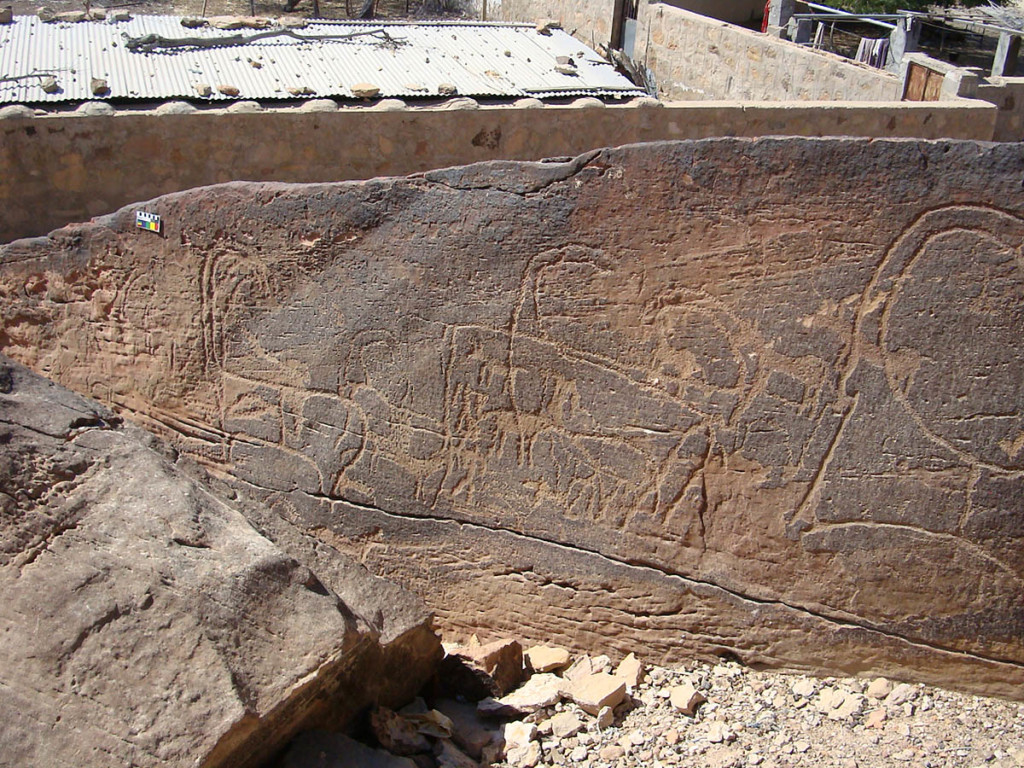 Fig. 4 – An heavily eroded rock engraved with animal motives near the village of Shenah – (photo by Angelo Fossati)

Of significant interest is the presence of ibex-like figures that have been engraved on the rocky walls of many wadis in Oman and that have connection with similar figures present elsewhere in the Arabian Peninsula (Anati 1968; Insall 1999; Khan 2003) (fig. 5). 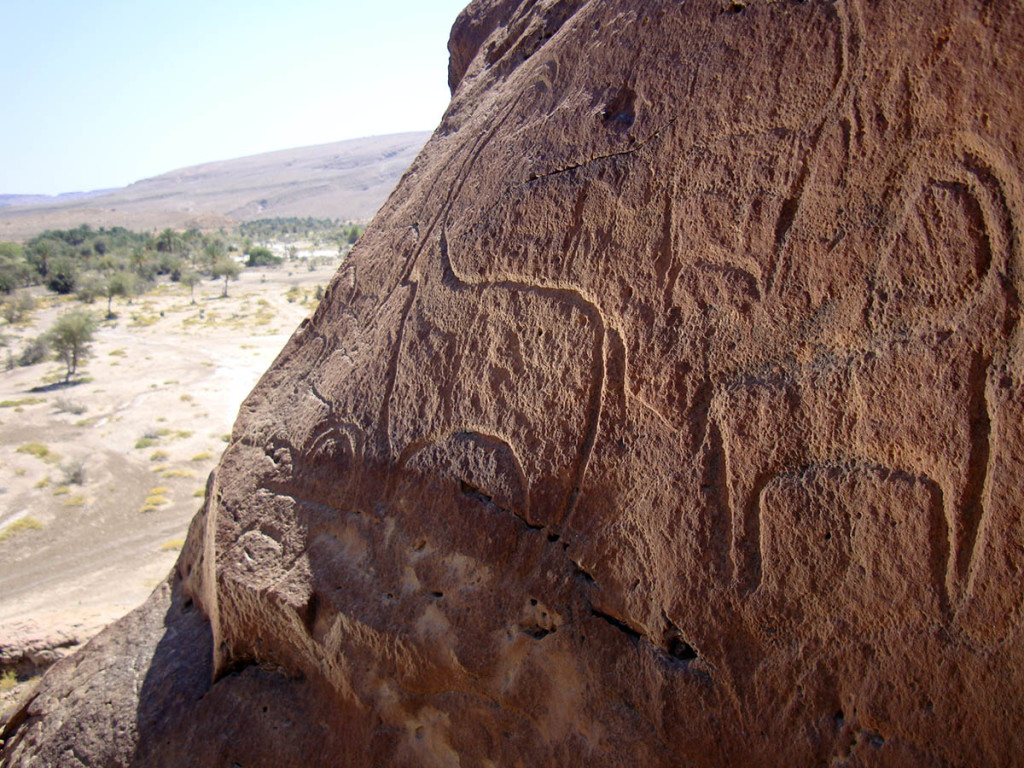 Fig. 5 – Group of goat like figures engraved in an outcrop at Shenah – (photo by Angelo Fossati)

These earliest (Phase 1) engravings were probably made in the fourth millennium BC (5,000-6,000 years ago) by hunters that frequented the Jebel Akhdar Mountains in search of prey. A second phase consists of angular, stylized human figures, including a group of women, each seated on a throne and accompanied by an attendant (fig. 6). Stylistically related to the anthropomorphic bas-relief sculptures on the Hasat Bin Salt Monument (Coleman’s Rock), these images probably date to the third and second millennia BC (3,000 to 4,500 years ago) based on cross-dating with carved tombs found elsewhere in Oman and Abu Dhabi (Cleuziou, Tosi 2007). These women shown seated on thrones probably represent royalty (queens or princesses) based on this sort of thematic portrayal as found throughout Near Eastern Officialdom from Egypt to Mesopotamia during this period. 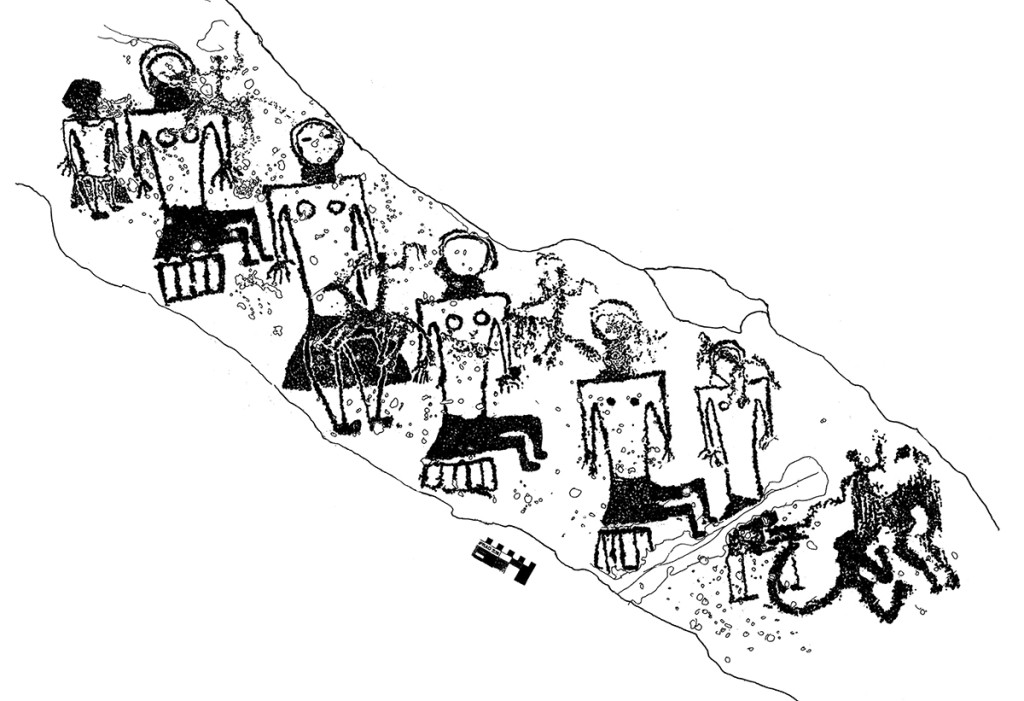 Fig. 6 – Ladies sitting on a chair. They probably are princesses seated on a throne and they have a servant helping them – Gore Anaqsah, Wadi Sahtan – (drawing by Angelo Fossati)

Phase 3 figures include both petroglyphs and pictographs whose primary motifs are geometric/symbolic patterns (solar symbols, sub-rectangular [rectilinear] forms, and others) sometimes accompanied by human figures in a few related schematic styles (fig. 7-8). 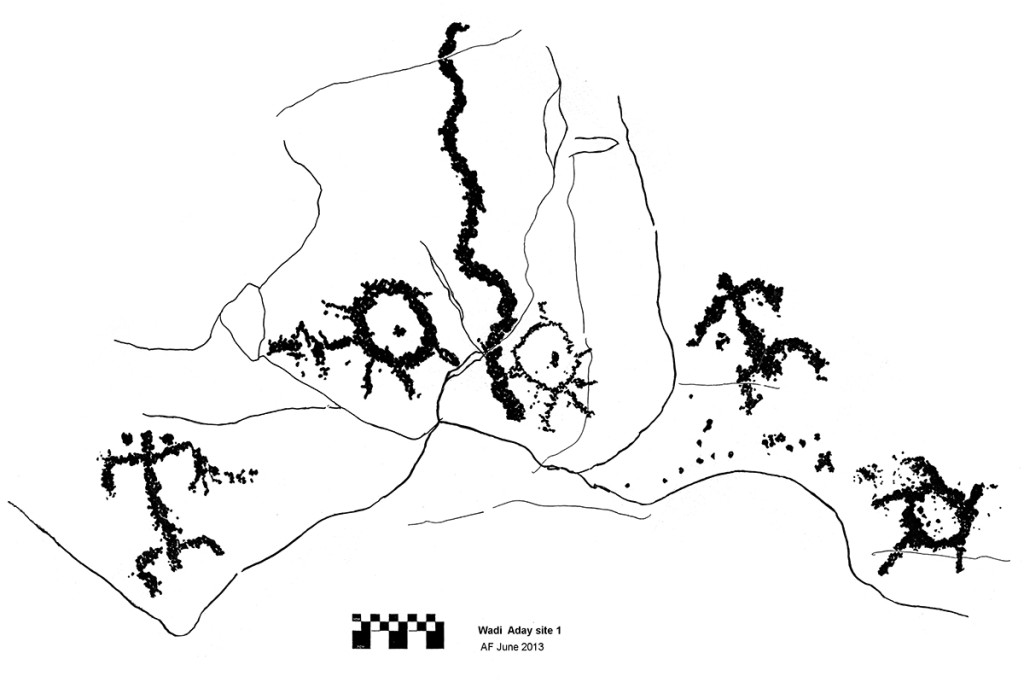 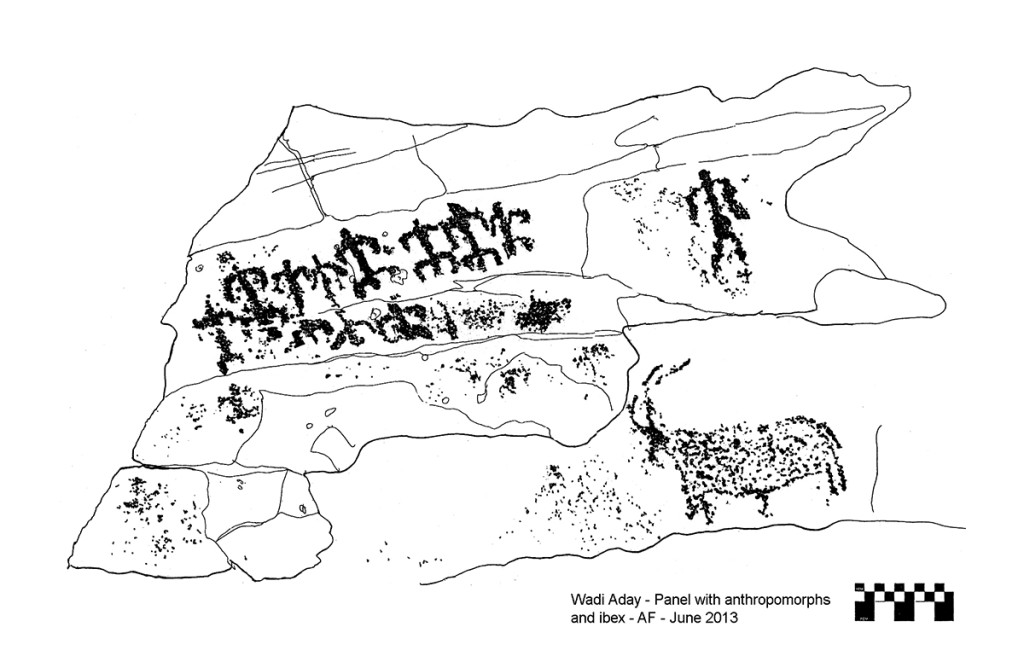 Fig. 8 – A group of human figures in a schematic praying position and an ibex – Wady Aday, a site near Muscat the capital of Oman 8 – (drawing by Angelo Fossati) 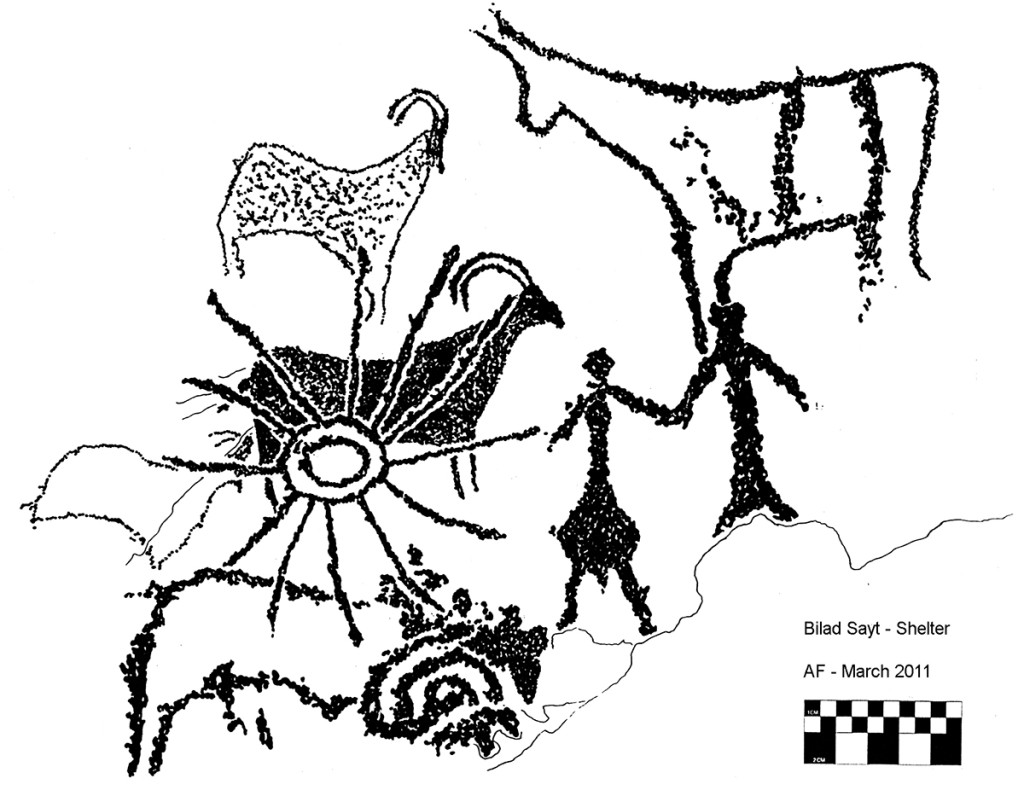 Phase 3 also includes painted figures in white and red but I have yet to find these pictographs in superimposition sequences with petroglyphs so they are classified into this phase based on thematic and stylistic criteria (fig. 10-11). 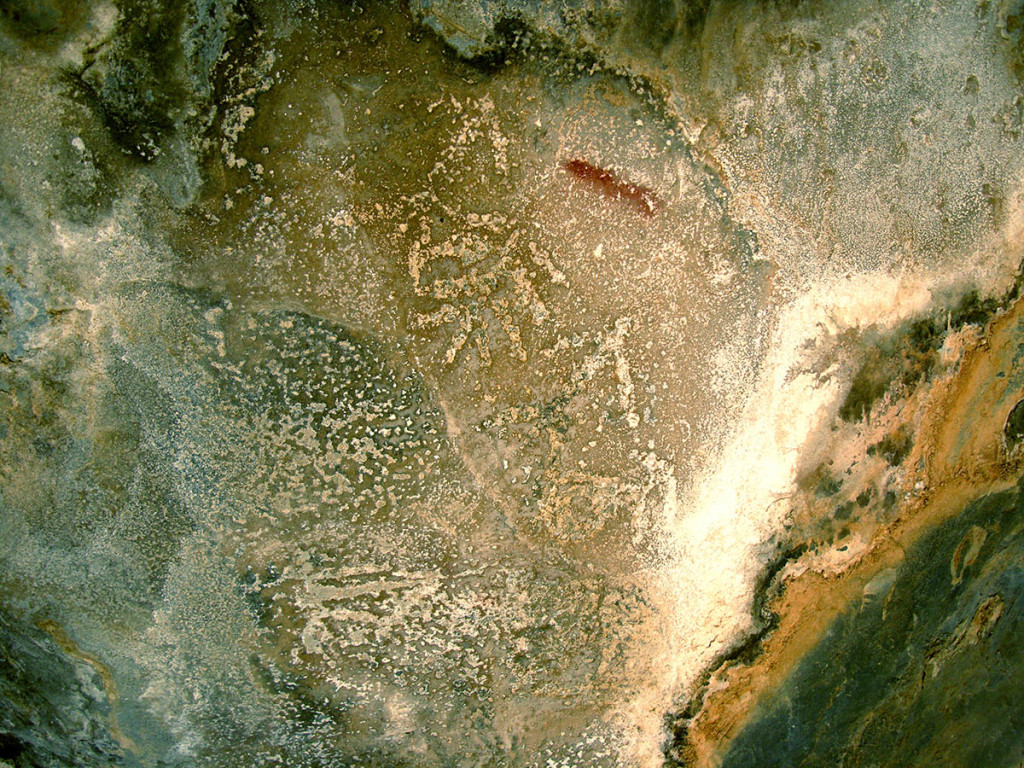 Fig. 10 – Anthropomorphs and tree-like figures painted in white on a roof of a shelter in Wadi Tanuf (photo by Angelo Fossati) 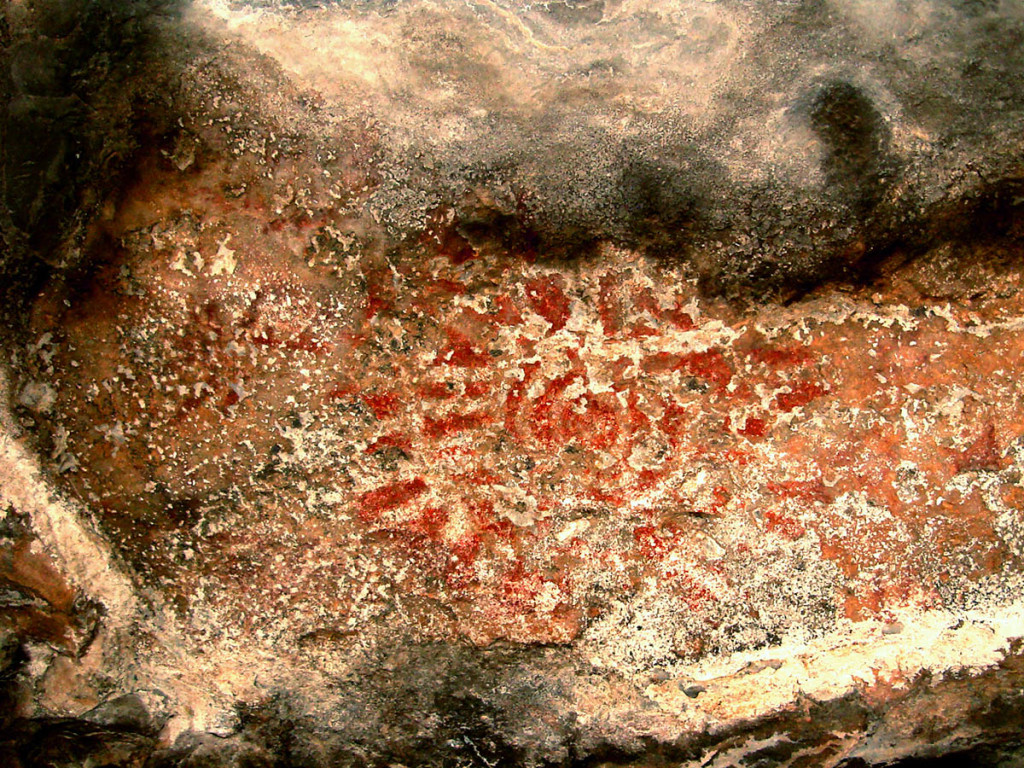 Fig. 11 – Solar figure painted in red and white on a roof of a shelter in Wadi Tanuf (photo by Angelo Fossati) 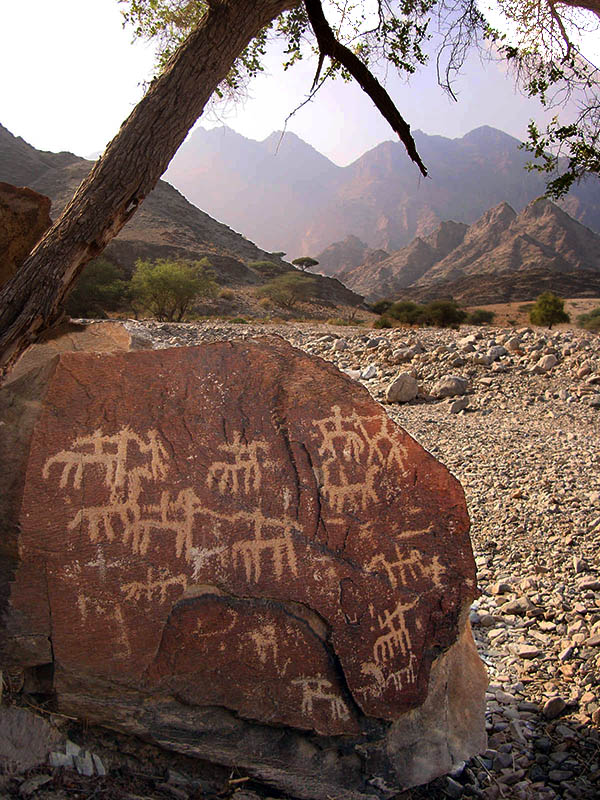 Fig. 12 – A group of riders on horses and camels engraved on a boulder near Al-Hemyaniya village – Wadi Al Ayn – (photo by Angelo Fossati) 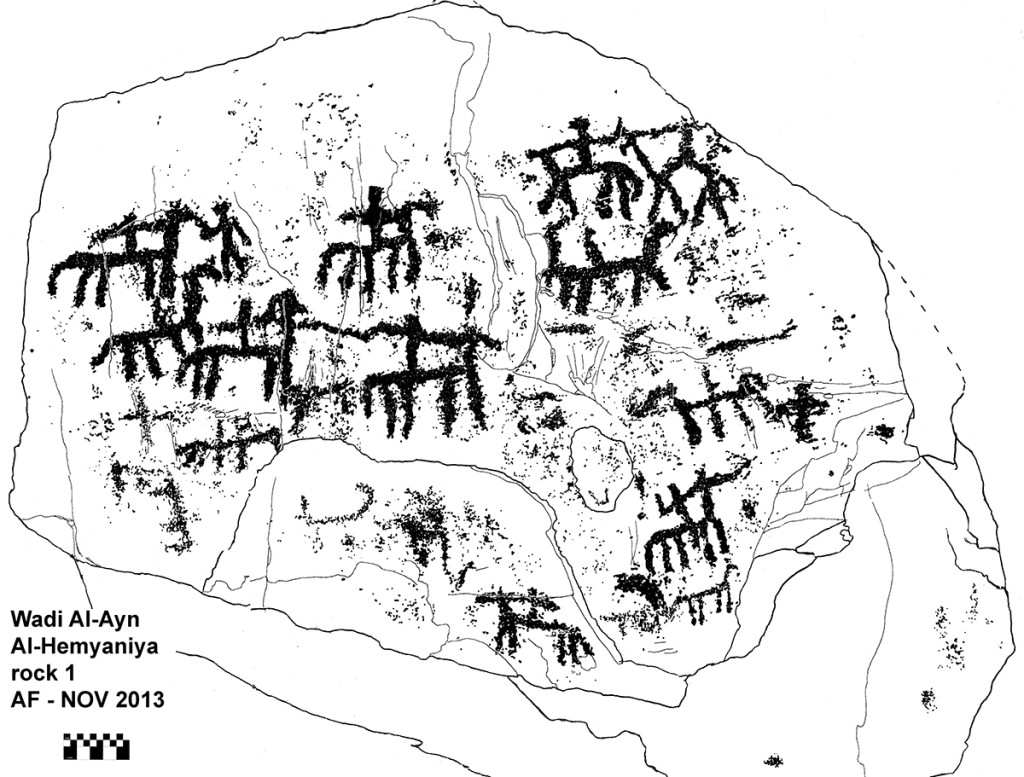 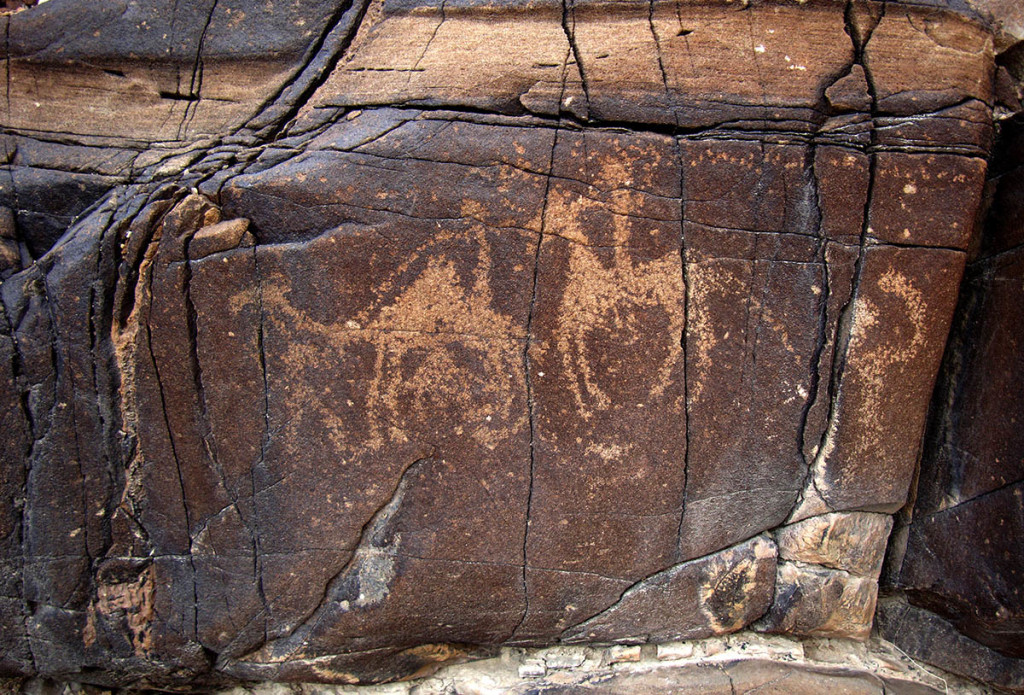 Fig. 14 – Riders on horse and on camel. The camel in Oman is typically ridden sitting behind the hump of the animal (photo by Angelo Fossati) 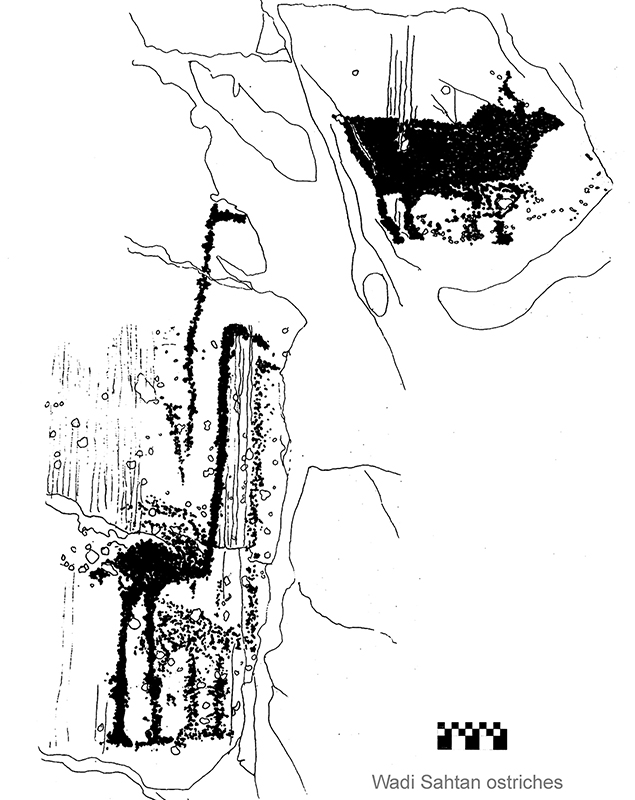 Fig. 15 – Ostriches and bull. It is believed that the ostriches are mating. The bull has a big hump and can be identify as a type very near to the animal called “Indian Bull” – Wadi Sahtan – (drawing by Angelo Fossati) 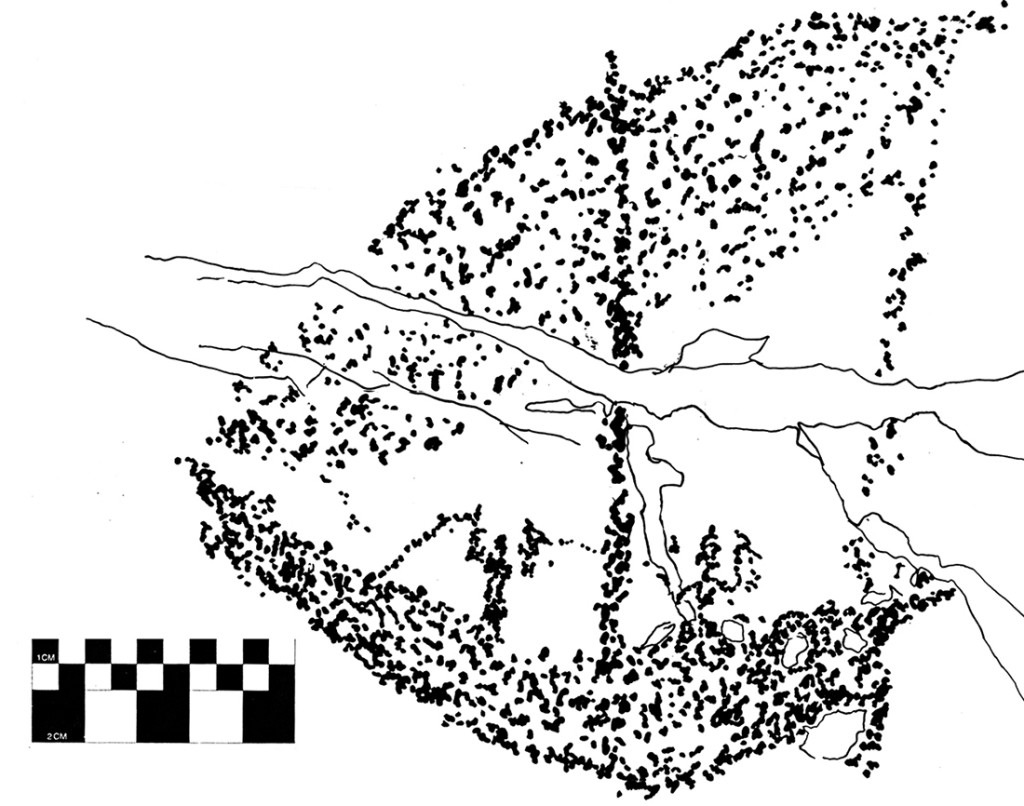 Fig. 16 – A typical Omani boat engraved on a rock at Wadi Al Hareem. These boats were used to trade goods, like frankincense, from the internal part of the Arabian peninsula to the other countries of the gulf (drawing by Angelo Fossati) 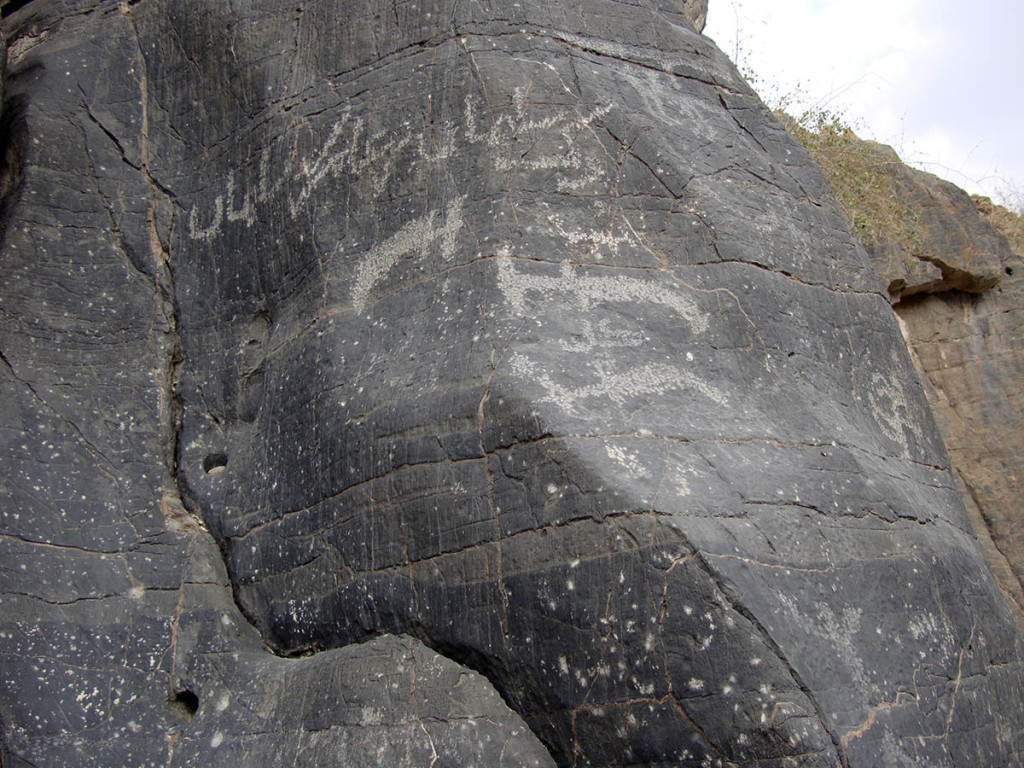 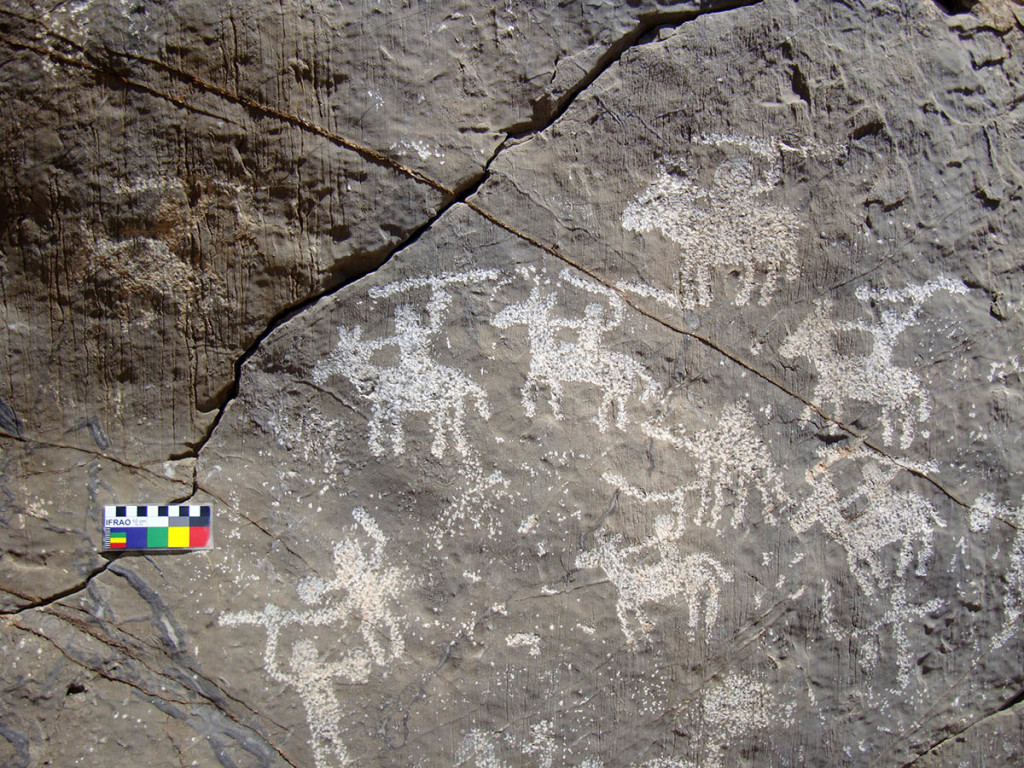 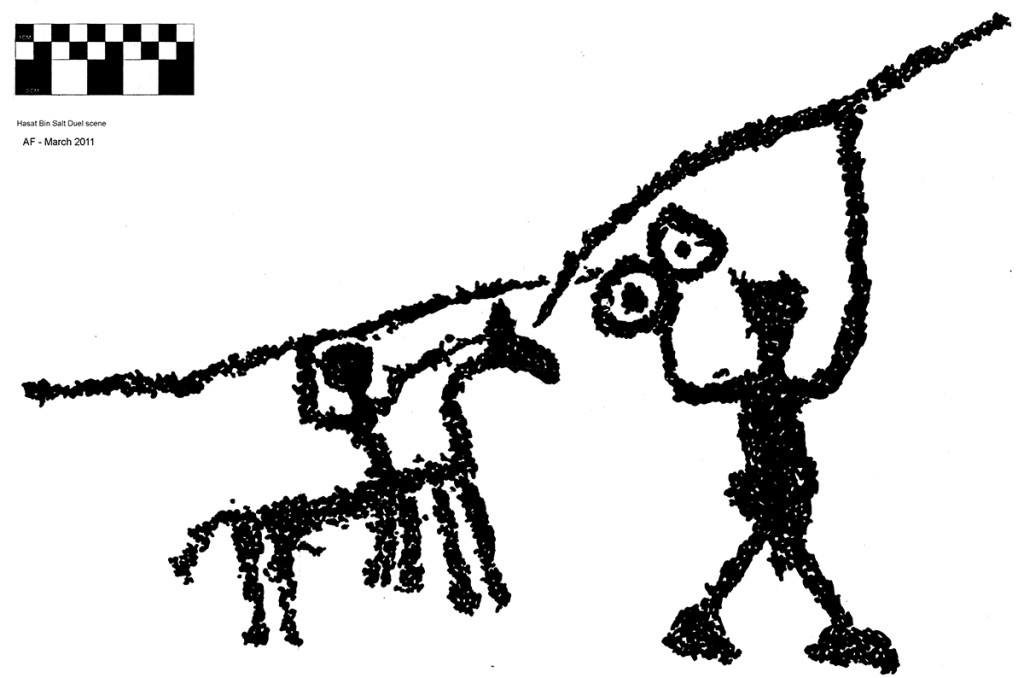 Fig. 19 – A duel between an horseman and a warrior. These engravings are etched around the big boulder where there are the famous composition of figures in bas relief – Hasat Bin Salt (Coleman’s Rock) – (drawing by Angelo Fossati)

I have met the artist who carved a beautiful representation of an oud (an Arabian lute) as a tribute to a famous Yemeni singer (fig. 20), and we have also recorded a petroglyph of three automobiles (fig. 21). 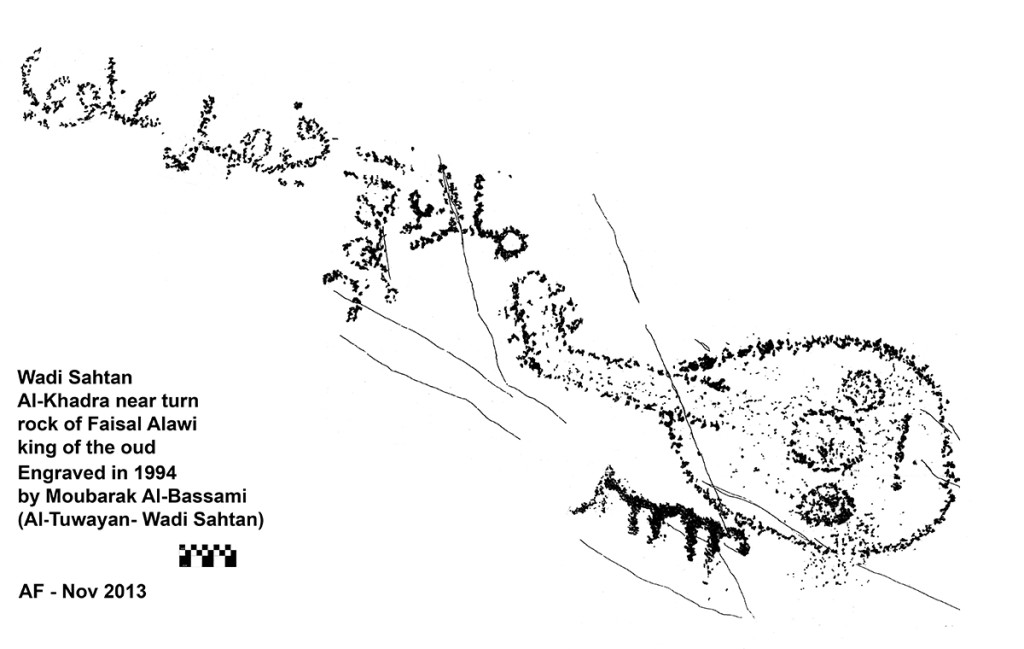 Fig. 20 – Representation of a oud (an Arabian lute) with an inscription that praises Faisal Alawi, a famous singer from the nearby country, Yemen, calling him “the king of the oud” – Al Khadra, Wadi Sahtan – (drawing by Angelo Fossati) 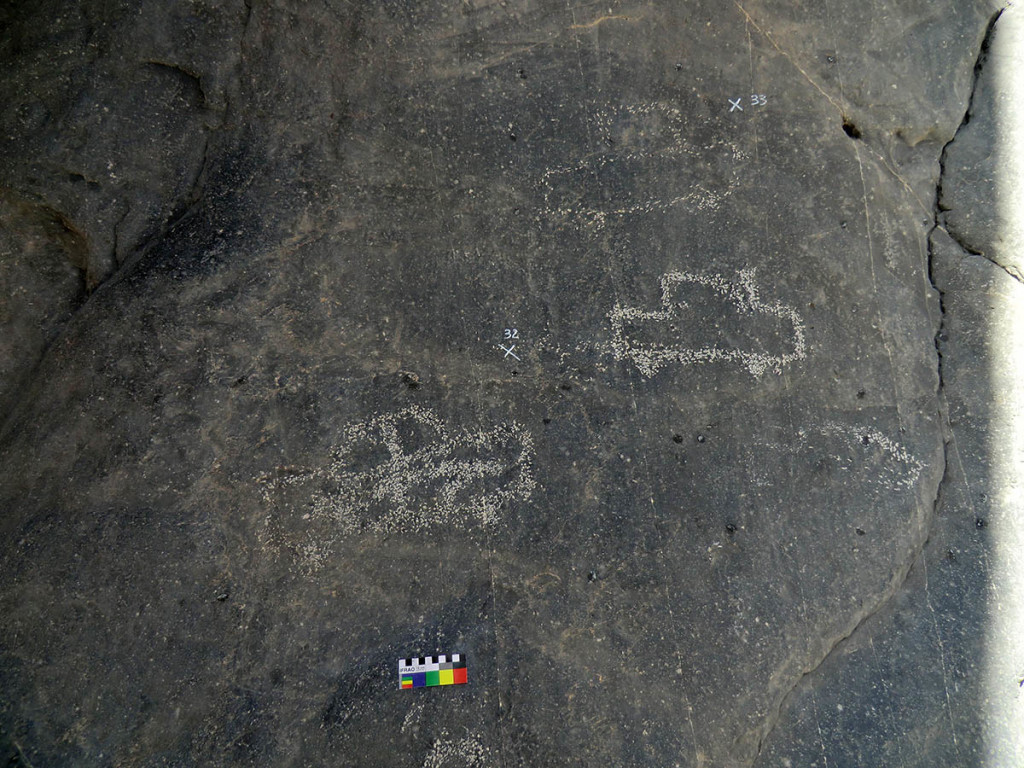 Fig. 21 – Three cars engraved on a rock at Al Khadra. They represent the first motor vehicles entering in the wadi in the last century, probably already during the thirties – Wadi Sahtan (photo by Francesca Roncoroni)

The beautiful leopards (or lions) engraved in Wadi Sahtan (fig. 22) were created—maybe with totemic value—during the last millennium BC; when, for the first time, the Arab people used a writing system. A few inscriptions in the ancient South Arabic alphabet (which is different from today’s standard Arabic writing) accompany some of these figures of warriors and animals (fig. 23). These inscriptions are names of people—possible travelers, traders, or inhabitants of the wadi villages—the same “artists” that produced the older rock art. Later inscriptions, in standard Arabic script, witness the importance of the wadis as road systems that connected the south and interior of the country with the coastal area during historical times (fig. 24). 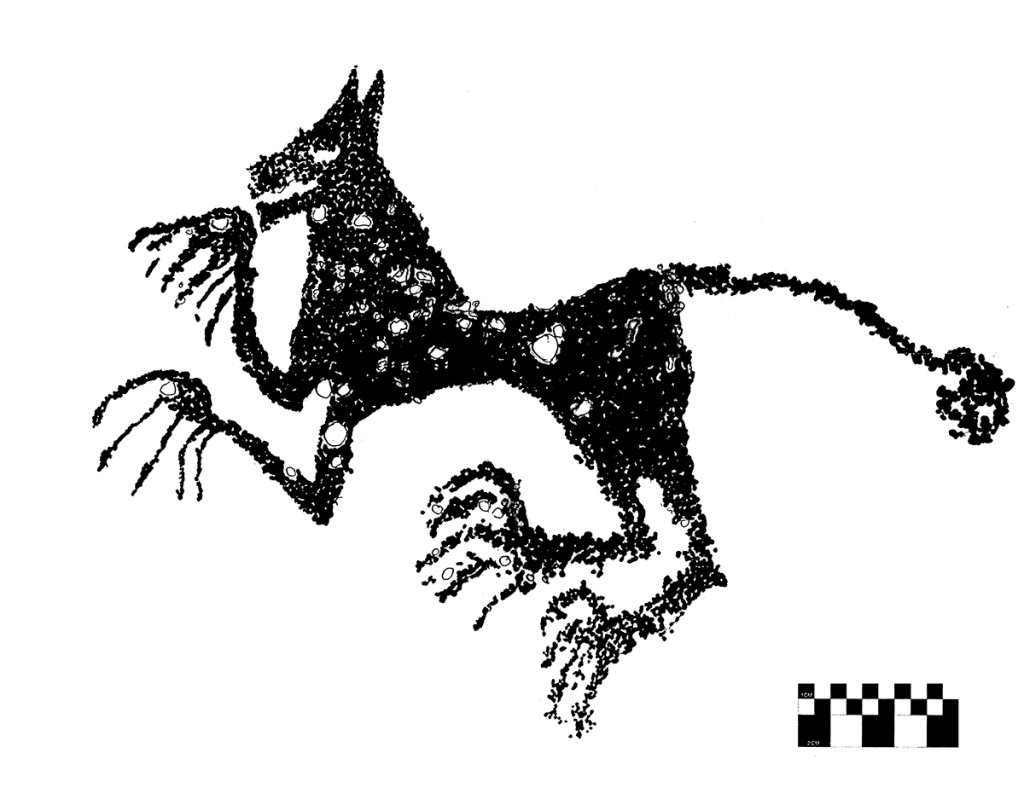 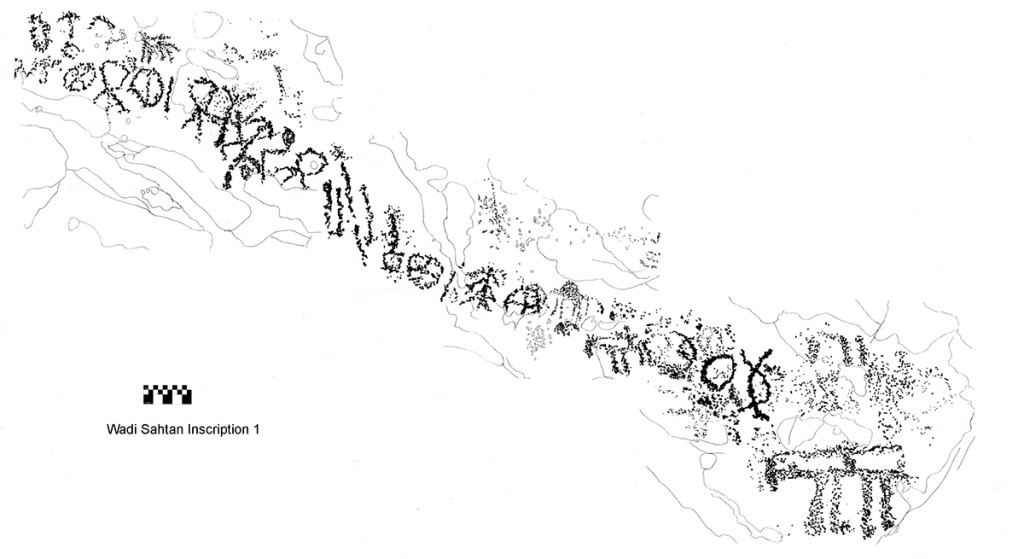 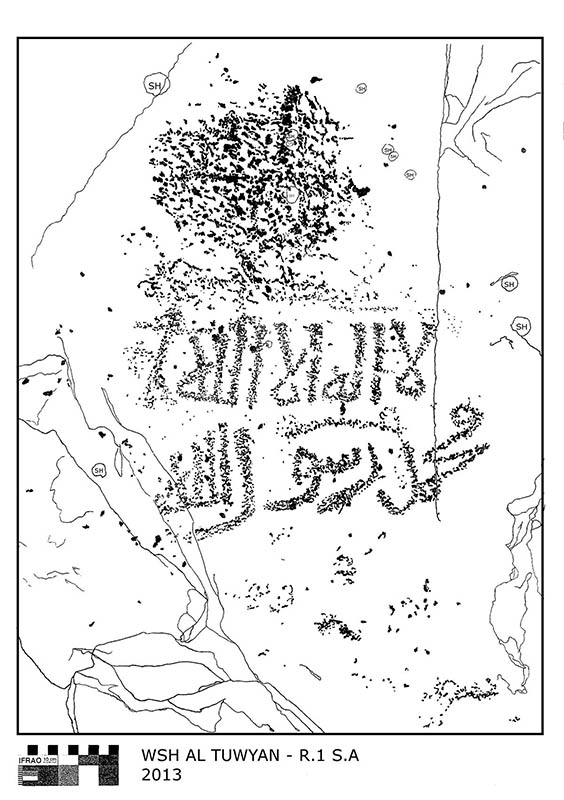 Fig. 24 – The Shahada is an Islamic creed that declares the oneness of God and the acceptance of Muhammad as God’s prophet. An horseman figure has been over pecked with the probable intention of cancelling the figure – Al Tuwyan, Wadi Sahtan – (drawing by Francesca Roncoroni)

The interpretation of Omani rock art is in its infancy. Further work will undoubtedly change these preliminary observations as additional rock art research is integrated with ongoing archaeological research on the different cultures that have inhabited Oman through the centuries. As the road building and railroad construction continue as part of Oman’s economic development, construction activities continue to threaten many sites, but the Ministry of Heritage and Culture of the Sultanate of Oman is committed to document endangered sites as part of the salvage effort to preserve the rock art of this area. Hopefully, the result will be additional information that will enable the development of a more secure chronology and a more detailed interpretation of this rich body of ancient rock art. 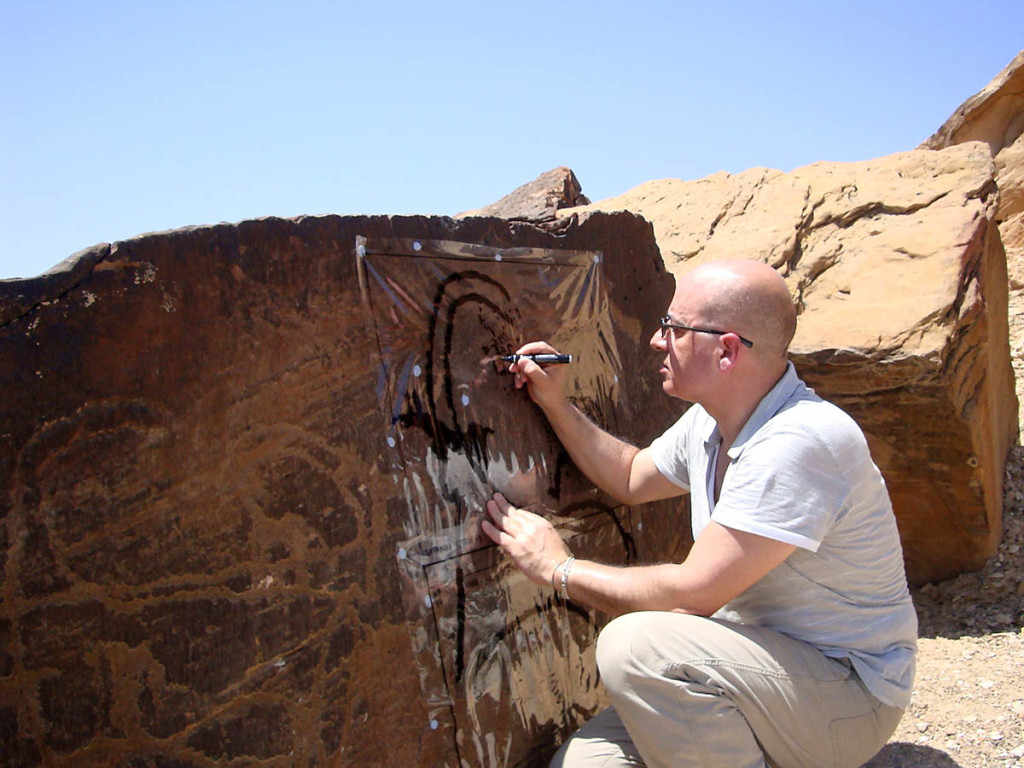 I express my deep gratitude to the Undersecretary of Heritage H.E. Salim Mohammed Al-Mahrooqi, to the General Director of Archaeology & Museums Hassan Mohammed Ali Al-Lawati. Sultan Al-Bakri, Director of Excavations & Archaeological Studies for the Ministry of Heritage and Culture in Oman, encouraged this study and gave the permission of publishing. Biubwa Al-Sabri supported my research giving a lot of important suggestions. I would like to thank Prof. Maurizio Tosi, permanent consultant for the Ministry of Heritage and Culture in Oman for giving me the opportunity of studying the rock art of this beautiful country and sharing with me his valuable knowledge on Omani archaeology. My deep gratitude to Dr. James D. Keyser and Mike Taylor for inviting me to present the Omani rock art to the US academic public and for the help in editing this first report.