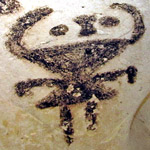 The Bulgarian Magura cave is well known for its impressive prehistoric paintings, scattered along an astonishing and dreamy 240 m long underground diverticulum, for which its Art Gallery is really worth a visit. More than 750 darkish figures have been counted, made with bat guano, smeared or rubbed along the cave walls; on the curvy  shaped vaults and niches, white or yellowish “plastered” by the nature, we can recognise dancing, hunting, and mating scenes, and organise the figures into four thematic groups: anthropomorphic, zoomorphic, geometric, and symbolic signs. [Text and photogallery]

The Magura Cave (Пещера МАГУРА, Peštera Magura in Bulgarian) is a karst cave situated in the north-western corner of Bulgaria, Vidin district, near the village of Rabiša; it is also known as the Rabiša cave. It’s 25 km far from Belogradchik, less than half an hour by car…

If interested, you may read the related TRACCE paper:
Bulgarian rock art, the Magura Cave paintings.