Australian Developments in the Dating of Rock Art 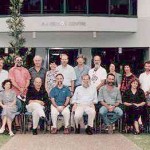 TRACCE no. 5 – by Claire Smith

Australian Developments in the Dating of Rock Art
This paper arises from discussion which occurred during the First Australian Workshop on Rock Picture Dating, held at Sydney earlier this year.

One of the principle issues which was discussed during the workshop was the problem of potential contamination of AMS radiocarbon dates for rock art by organic carbon from sources other than that associated with the painting event. There are many potential sources of contamination, including organisms which naturally occur on the rock face, such as algae, lichen and fungi. Remains of such organisms can become incorporated into the paint or surface skins, thus skewing the results to give an incorrect average age for the art. Surface contamination can be dealt with by pre-treatment of AMS samples with acids and alkalis but contamination within the sample itself is much more difficult to identify.

Contamination is likely to be the reason Josephine McDonald and others obtained inconsistent radiocarbon dates, ranging from 6 085 bp to 29 795 bp from charcoal taken from the same motif at a rock art site in the Sydney Basin, Australia. At Rock Picture Dating Workshop, MacDonald presented results from an extension of this project to include multiple sampled motifs from an additional three sites. In all four shelters tested, all multiple sampled motifs returned age determinations that differ from each other by more than one standard deviation.

A related issue which received much discussion was that of untargetted sampling. Robert Bednarik pointed to an extreme example, that of an Upper Palaeolithic cave in Europe which has been ‘sampled out’, in that it no longer contains paintings with sufficient material for dating. He argued that, unless we are more cautious in our approaches, future generations may point to the current generation of rock art researchers as ‘rock art vandals’.

Aboriginal participant Ken Isaacson expressed similar concerns, especially in terms of the possibility of several teams of archaeologists working in a single area creating alternate ‘waves’ of sampling. This concern is likely to be felt by many Aboriginal people and may well emerge as an issue which has to be addressed by rock art researchers, say, through the co-ordination of regional research teams, as well as a practical (and much-needed) constraint upon random sampling.

Indeed, sampling problems imbued much of the discussion throughout the workshop. A third problem that emerged was that of obtaining a suitable sample for dating purposes. Often, researchers have taken samples that have proved to contain insufficient organic material for radiometric dating. In part, this is because the sampling technique inevitably involves some damage to the art and researchers are naturally loathe to damage the material they study. They tend to minimise this damage by taking small samples. The dilemma is that taking too small a sample only harms the art for no gain while taking too big a sample unnecessarily damages parts of the art.

A proposal put forward by Claudio Tuniz and Noelene Cole, among others, was to establish some kind of basic protocol for sampling, including the weighing of samples in the field in an attempt to ensure that they contain sufficient material for dating. In later discussion John Clegg suggested that two trips should be made to collect material. The first trip would be to collect very small samples to be taken back to the laboratory in order to identify precisely the organic components in the sample to be dated and any contaminants in the sample. The second trip would be to collect larger samples of a quantity pre-determined by the lab tests. The latter would be used for radiocarbon dating. This would provide a greater assurance that radiocarbon dates referred to a relevant and known event as well as guard against the possibility of wastefully damaging the rock art. Clegg’s suggestion is likely to be incorporated into the sampling protocol that is being formulated by Tuniz and Cole.

Andrée Rosenfeld presented an important paper in which she argued that while the developments in radiometric dating of rock art were undoubtably exciting, it was also important not to discard proven stylistic methods of dating. She argued for a complementary approach that draws upon the strengths of both radiocarbon and stylistic methods, while recognising the limitations inherent in each. Mike Morwood supported this argument, and suggested that one way of dealing with the problem of untargetted sampling would be to use stylistic analyses to focus sampling strategies. He argued that this would lead to a systematic, contextual approach rather than an approach which focussed primarily on finding the oldest dates.

This workshop was innovative when compared to developments in these areas in other parts of the world. Moreover, it was seminal in terms of the strategies that emerged in terms of the difficulties inherent in contemporary rock art dating. Serious problems in sampling, dating and analytical techniques were identified and subjected to on-going debate throughout the workshop. In addition, a number of important strategies were developed during the discussion session, with several participants leaving the workshop with a mandate to take explicit action on particular projects. Cross-disciplinary input was very important in this process and it is unlikely that the same results could have emerged from a forum that had input only from one discipline. The results of these projects are likely to be of great interest and value to both indigenous and non-indigenous people involved in rock art research.

Australian rock art researchers are seriously attempting to confront some of the problems that are inherent in both radiometric and stylistic approaches to dating rock art. We recognize that neither approach is perfectly reliable as things stand. However, with concerted research effort from a range of individuals and with reliable institutional support we hope to be able to make significant advances in the near future.

Claire Smith
Department of Archaeology and Palaeoanthropology University of New England Armidale.
back to index